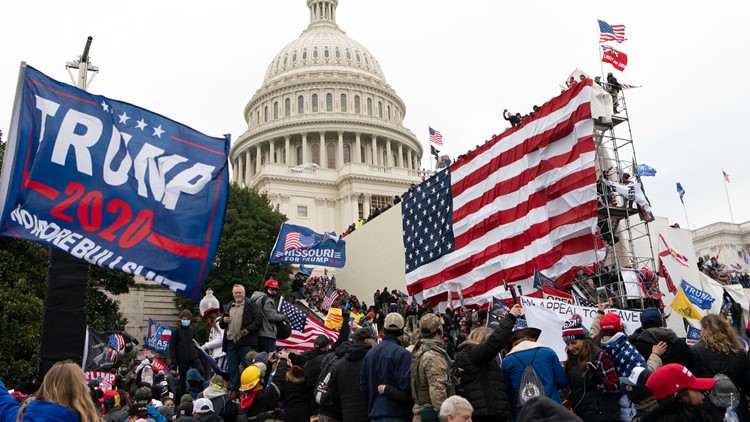 Forty percent of adults in Washington said they followed the Jan. 6 House of Representatives hearings, while 27 percent said they did not follow them at all.

SEATTLE — Washington state adults place more blame on Trump supporters for the Jan. 6 riot in the Capitol against Trump himself, according to WA poll results released Sunday.

Forty percent of adults in Washington state said they followed the public hearings of the House Special Committee on the Jan. 6 attack, while 27 percent said they didn’t follow them at all. Of those who paid close attention to the hearings, 49% said they were liberal and 22% said they were conservative.

“Certainly January 6 has implications for the United States and certainly Washington State in a way that is in no way helpful to Republican candidates,” said Scott McClellan, former White House press secretary for President Bush and KING 5 political analyst. “Certainly it’s a net negative for Republicans in the general election and in a state like Washington that’s Democratic.”

Washington state voters were asked on a scale of 1 to 10 how responsible the following groups are for the Jan. 6 attack: Trump supporters, Trump himself, or “left activists.”

Trump supporters were ranked the most responsible at 7.2, with the highest rating, 9.1, coming from those who said they observed the hearings very closely.

Those who identified as “very liberal” rated Trump supporters’ accountability at a 9, while Trump himself was rated as accountable at an 8.9.

Overall, adults gave Trump’s accountability a 6.5, but that ranking rose to 8.8 among those who followed the hearings very closely.

“Whether it’s U.S. Senate races to state legislative races or local races, people are certainly very concerned about what happened,” said Gary Locke, a former Washington governor and political analyst at KING 5. “They also acknowledge that while the President instigated, encouraged and supported the violence and knew it might have occurred, they do not hold him directly responsible. Many do, but not the vast majority of people.”

At the end of the overall ranking, adults ranked “left activists” with a degree of responsibility of 4.6. That number rose to 7.1 among “very conservative” respondents and Trump voters. Among those who followed the hearing very closely, the ranking dropped to 3.3.

Eight in ten respondents agreed that those responsible for the January 6 attack should be held accountable, including criminal investigations.

Almost all – 99% – of those who said they followed the hearings closely said those responsible should be held accountable.

When asked whether the administration was exaggerating the events of Jan. 6 because of the political persecution of conservatives, 52% of respondents disagreed, but 83% of Trump voters agreed.

MLB draft undergoes an L.A. facelift with an eye on fan growth

‘The Bold and the Beautiful’ Spoilers: Fans React To Rena Sofer (Quinn Forrester) Exiting The Show, “Will Miss You”