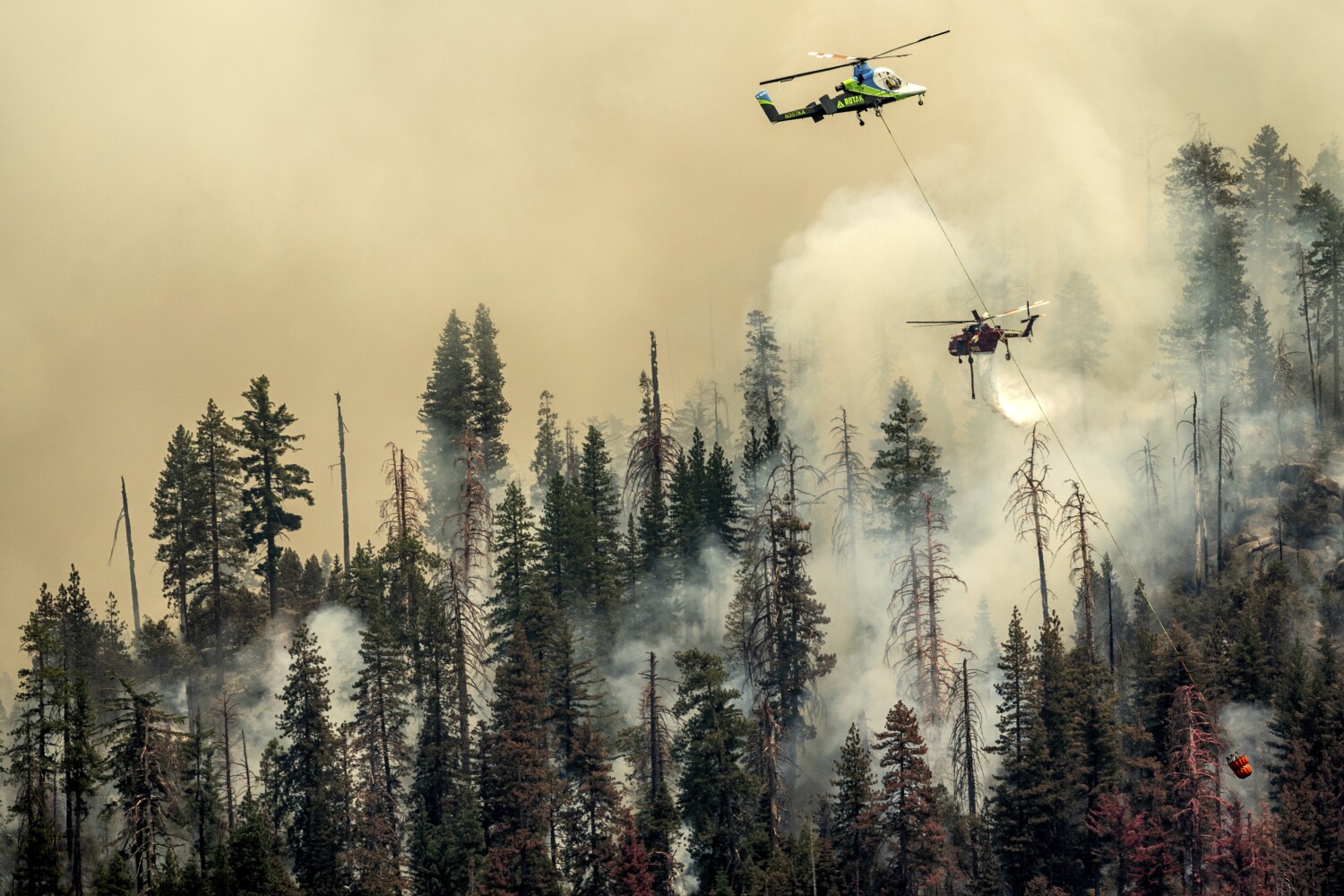 The Washburn Fire had grown to at least 1,591 acres and was burning at the south end of the park near historic Mariposa Grove, home to about 500 giant sequoias, officials said. The fire also threatens the community of Wawona, prompting officials to close Highway 41.

More than 300 firefighters battled the blaze in a coordinated land and air raid, officials said. At Mariposa Grove, crews scraped ground cover down to bare ground to prevent flames and localized fires from spreading, and wrapped some of the ancient giants in protective wrap.

Firefighters had also installed a sprinkler system to water the famous Grizzly Giant, which is more than 200 feet tall and one of the tallest sequoias in the park.

“The fire burns in difficult terrain with continuous fuels,” posing a “significant threat to firefighters,” fire officials said in a statement.

On Saturday, intense smoke and flames threw embers and debris hundreds of feet into the air and nearly hit a plane fighting the blaze, according to firefight radio traffic.

“A branch ran over our heads,” the pilot reported to the dispatchers. “Pretty good size, probably 50 feet above us when we came down and fell right between Tanker 103 and me.”

“Okay, copy. So like a repeat of yesterday,” said a dispatcher.

“That’s exactly what I’m getting at,” the pilot replied. “So if we keep seeing this, maybe we need to shut it down. I don’t want to risk breaking a window on an airplane or injuring an airplane for this.”

Good news for firefighters was that relative humidity was about 26% Sunday morning, officials said. The lower the humidity, the drier the conditions, increasing the likelihood of faster flame spread. Firefighters said they expected the fire “to continue to grow slightly” and that temperatures would reach the low 80s.

A warming trend was expected to start on Sunday and continue through the week.

Officials said Sunday Yosemite remains open and visitors are advised to enter the park via Highways 140 or 120, officials said.

The Washburn Fire most recently threatened the ancient redwoods, which are found in the wild only on the western slopes of the Sierra Nevada. Although they thrive on fire, the redwoods are increasingly unable to cope with intense wildfires caused by climate change, years of drought and decades of aggressive firefighting, which have resulted in dense vegetation in some forested areas.

Fire officials determined that a history of prescribed burns at Mariposa Grove, along with scars from recent burns, could slow the spread of the fire and limit potential damage.

“Once the fire reaches some of the recent burn scars, the spread may slow,” officials said.

https://www.latimes.com/california/story/2022-07-10/firefighters-continue-battle-against-fire-threatening-giant-sequoias-in-yosemite-national-park Washburn fire continues to burn near sequoias in Yosemite

NBC ‘Days of Our Lives’ Spoilers: Kristen’s on edge, Sarah looks for answers, and Gabi’s heading for a mess

The importance of the 2022 midterm elections