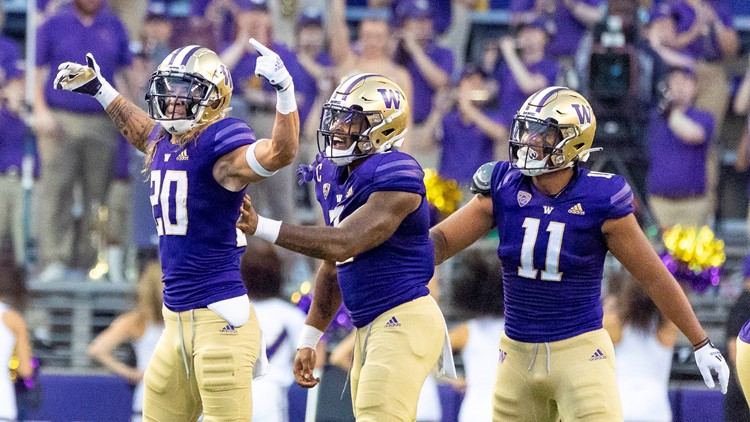 Kalen DeBoer seems to have brought some fun back to UW, and a win over the Spartans would immediately raise their profile early in the Pac-12 schedule

SEATTLE (AP) — Things have been going according to plan for the past two weeks against lesser competition. Impressive moments on both sides of the ball against teams that should be warming up for the challenges ahead.

That description could be applied to both No. 11 Michigan State and Washington, who head into their out-of-conference showdown on Saturday.

Michigan State (2-0) beat a few Mid-American Conference teams and did nothing to refute the notion that the Spartans are worthy of being on the cusp of jumping into the top 10. Washington (2-0) beat Kent State and Portland State and seems to be enjoying the early days of Kalen DeBoer’s tenure as head coach.

But while both teams have looked good, neither has proved much so far. That makes Saturday’s matchup pretty intriguing.

“It would be huge, no question. With the point where we’re coming back and building up, I like where we are after two games,” said DeBoer. “But that’s a different animal. We’re talking about a high-level team, so it would mean a lot to us, there’s no doubt about that.”

DeBoer appears to have brought some fun back to the Huskies, and a win over the Spartans would immediately raise their profile nationally and set expectations for the start of their Pac-12 schedule next week.

But Washington is in a bit of a drought when it comes to marquee home wins against non-West Coast teams. Washington has not defeated a Power Five opponent in a home non-conference game since beating Michigan to open the 2001 season. This 21-year drought has seen home losses in Notre Dame, Ohio State, LSU and Nebraska.

Michigan State Coach Mel Tucker knows the importance of pulling off a statement win early in his tenure. While the 2020 season was tough for the Spartans, their convincing win on the road against a top-ranked Miami team last year appeared to be the catalyst for Michigan State’s great season, which ended in a Peach Bowl win.

But Tucker wants to focus on that team and not on comparisons to a year ago.

“We’re building the story of this year’s team right now,” said Tucker. “Last year’s team is gone. This is a different team. This is a new team, this is a new season. We’re focusing on what we need to do every day to prepare to play good football. That is where our focus needs to be.”

One person who knows a lot about the Spartans is Washington quarterback Michael Penix Jr. Penix faced Michigan State twice during his time in Indiana and had some of his best games. He threw for 286 yards and three touchdowns and ran for one in a 40-31 loss to the Spartans in 2019. A year later, Penix threw for 320 yards and two touchdowns in a 24-0 win over the Spartans.

DeBoer is also familiar with the Spartans. As an assistant at Eastern Michigan, he faced Michigan State and was an offensive coordinator at Indiana for that loss to the Spartans in 2019.

Michigan State hopes Penix will become familiar with the face of edge rusher Jacoby Windmon. Windmon was named Big Ten Defensive Player of the Week for each of the first two weeks of the season. He leads the country in sacks with 5½ and forces fumbles with four. Windmon had 1½ sacks and three forced fumbles against Akron last week and had four sacks in the opener against Western Michigan. Windmon, a transfer from UNLV, is the first Michigan state defenseman to be named the Big Ten player of the week in consecutive weeks.

Washington’s offensive coach knows Windmon from their time in Fresno State. Two seasons ago, Windmon had 2½ sacks against Fresno State while playing for UNLV.

The West is not unfamiliar territory for the state of Michigan, nor has it had much success there. Since 1957, the Spartans have been 0-13 in regular season games played in California, Washington, Oregon, Arizona and Hawaii. Their last win in the West was on October 5, 1957, a 19-0 win over Cal.

The Huskies and Spartans have only faced each other three times before, most recently in the 1997 Aloha Bowl, a 51-23 win in Washington.

Kyrie Irving asks Nets for trade ahead of deadline

NBA first-week surprises – The good (the Jazz!), the bad (the 76ers) and the ugly (sorry, Lakers fans)