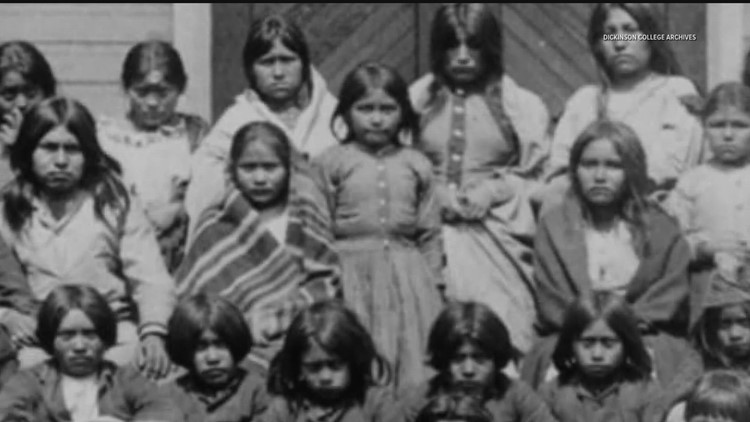 By the 1960s, hundreds of thousands of Native American children were forcibly evicted from their homes and placed in state boarding schools.

“Despite the trauma that this brought, many were able to go on and truly lead our people, but then had to go through this process of losing their language and being separated from their family and tribes over time for a very important formative part of their lives.” , said Leonard Forsman, chairman of the Suquamish tribe.

By the 1960s, hundreds of thousands of Native American children were forcibly evicted from their homes and placed in state boarding schools. The goal was the systematic destruction of Aboriginal culture and communities, experts said.

“There’s a big split in our intergenerational transmission of knowledge, and also parenting skills and things like that have been lost,” Forsman said. “So if you imagine your own congregation going home tonight and knowing that all of your children aged at least five to 13 are gone, gone for nine months, at least nine months, and aren’t allowed to come back.”

Many children were physically and sexually abused. The federal government is now involved in identifying dozens of unmarked mass grave sites that have been uncovered across the United States and Canada.

A recent federal report identified more than 400 schools across the United States that were established to integrate Indigenous children into white society. Fifteen have been identified in Washington State.

Forsman said congressional action is in the works that could create a truth and healing commission for boarding schools.

“I hate to say we’re looking forward to it because it’s painful,” Forsman said. “But I think we look forward to there being more transparency and being able to identify and relate to them and then work to start the healing process for our people.”

The US Interior Report made recommendations to invest in language preservation, which many also lost due to the forced move.

Chargers vs. Houston Texans matchups, start time, how to watch