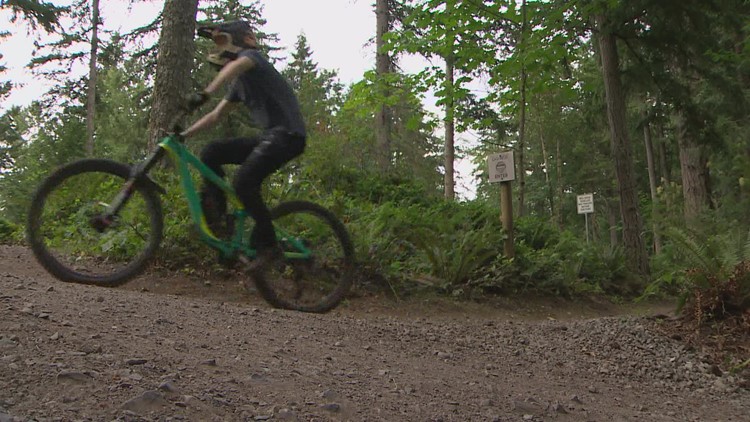 Wildlife officials have received thousands of responses to a survey focused on e-bike use on natural surface trails.

ISSAQUAH, Wash. – Electric bicycle use is growing at such a rate that state legislators and wildlife officials are studying their impact on trails and where they should be allowed.

You’ll find Mathew Rzucidlo out on the trails at Duthie Park most days, and now it’s not just other mountain bikers he shares the trail with.

“The problem with e-bikes is you see people speeding around trails and it’s basically a motorcycle and they have to go somewhere else but as long as people are polite and share the bike park I have no problem with that E-bikes in general,” said Rzucidlo.

People like Rzucidlo are exactly who the Washington Department of Fish and Wildlife and DNR wanted to hear from as part of a survey on e-bike use on natural surface trails.

“We’ve had approximately 7,000 respondents to this survey already, and we’ve had at least 120 people at each of our public meetings,” said Heide Anderson, recreation planner for the Washington Department of Fish and Wildlife.

“E-bikes really offer a way for many people to access trails and public lands that might otherwise not be possible,” Anderson said.

There are concerns about greater use of public land when it comes to wildlife, soil and water resources.

“Our biggest mission is to protect the wildlife resources out there, so it’s very important for us to try to balance the two now,” Anderson said.

The poll ended on Friday, and now wildlife officials have until the end of September to submit a report to lawmakers.

“We want to think about where the best locations are,” said Senator Marko Liias, chairman of the Senate Transportation Committee.

The next step is politics. The officials hope that the study will provide clear rules and regulations on when and where e-bikes can be used.

“We don’t want people rushing onto trails where it’s not safe to do so. We want to make sure they have the right bike for the right type of trail. That’s part of what the department is doing by thinking through those details,” Sen. Liias said

The main goal is to get more people outside.

“Ultimately, we want people to be there and enjoy it and use these facilities to use our state land to enjoy the outdoors, especially now that it’s so beautiful,” Sen. Liias said.