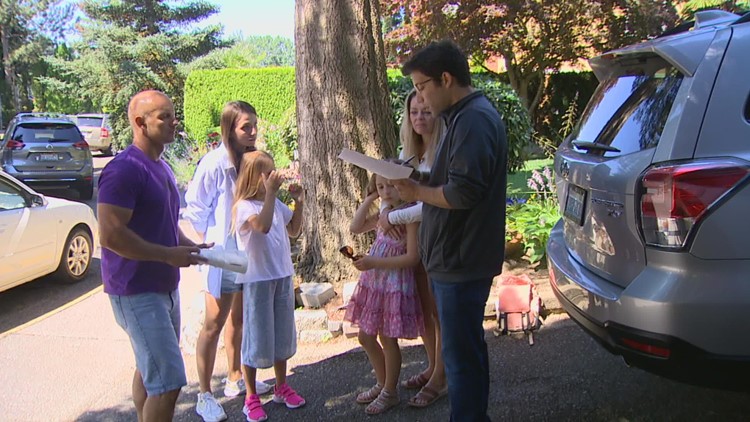 After months of moving from city to city, a Ukrainian family is now living in the United States starting from scratch.

SEATTLE – As a parent, your child comes first. Karyna and Artem Poleshchuk said the sound of bombs could be heard daily from their home in Karkev. Her 9-year-old daughter Veronika slept in her hall when planes flew past and fired rockets. They told KING 5 their story through their friend Elena Lee.

“Only whole buildings were burning and it was getting scary for the kid to stay around in Karkev,” Elena translated.

Artem is an athlete who won the World Powerlifting Championship in 2015 and is a trainer. Karyna is a cartographer. The couple were forced to do the unimaginable and leave behind the life they had built. They drove 20 hours straight and arrived in the United States a month ago after much transportation.

“They had no choice, the life they had in Ukraine was taken from them,” Elena said.

Lee volunteers to help refugees in King County and she has asked the Poleshchuk family what they need.

“It’s hard to exist here without a car,” Elena said.

With a budget of $4,000, they came across Emmanuel Ferran’s white Mazda. He signed the title to the family on Sunday, but there was no currency exchange.

“Having a car in my current ownership and also blessed with the idea of ​​being able to give it as a gift was a no-brainer,” said Emmanuel.

Emmanuel’s mother fled the civil war in El Salvador when she was a girl.

“She described to me how hard it is and she also described the helping hand she had,” Ferran said.

But the car was not entirely free. Emmanuel had a request:

Karyna stayed up all night baking a Sharlotka apple pie, her mother’s recipe. The cake was worth every bite.

“I’m trying to see if they can teach me the recipe so I can make it myself. That was a really good cake,” said Emmanuel.

“You never thought that kindness like that was possible,” Elena said.

It has been nearly four months since President Joe Biden announced the country would take in 100,000 Ukrainian refugees after their country was invaded by Russia. Washington state was home to some Ukrainians even before the invasion.

Dancing with the Stars (DWTS): Sharna Burgess Opens Up On Her Body Issues Post Pregnancy-‘Every Ounce Of Water In My Body Has Gone To My Vagina’