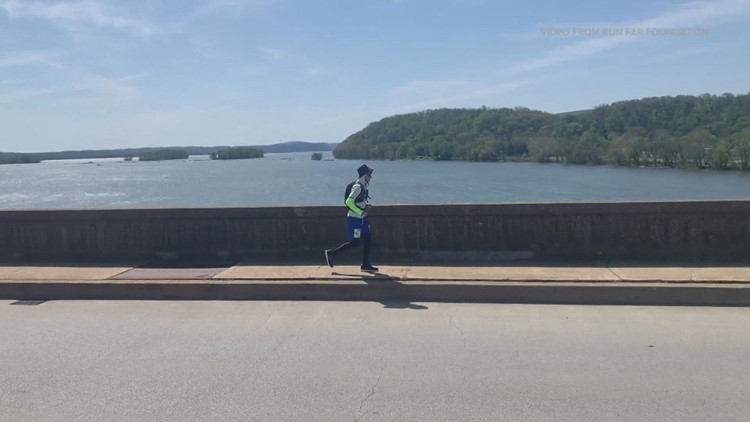 Greg Nance began his run on April 25th in Long Island, NY and will finish his journey on July 17th in Ocean Shores.

“We’re on a mission for youth mental health,” Nance said. “It’s always tough being a teenager, but never more so than now.”

Nance is running for his nonprofit Run Far Foundation, which funds youth-led volunteer projects across all 50 states to help young people find purpose, build community, have fun, and stay healthy.

Nancy overcame his own struggles with substance abuse and mental health when he was a teenager. After his grandfather’s debilitating stroke, Nance said he turned to alcohol and painkillers by the age of 16 to cope.

Volunteering and running helped him overcome his addiction and he has been sober since 2011. Over the course of his career, Nance has set 35 fastest known time records and completed seven marathons on seven continents in just seven days.

“Running for me was how I followed my smile, it was what made me happy, it helped me build my own sanity over the years and when you’re doing things you love, you can do it at the highest level,” Nance said. “You can live the life you envision, beyond your dreams.”

Nance said he’s been training for his cross-country run for more than a decade. He is now just 149 miles from the Pacific Ocean finish line. But first he made time to stop and celebrate with friends and family.

“We’re declaring victory here in Seattle tonight because it was just so incredible,” said Nance.

Nance has been joined by runners, cyclists and other supporters for some parts of his journey. People from across the country were also following on social media and via a live GPS tracker.

Nance’s Run Across America will be featured in an upcoming documentary. He also hopes more people will be inspired to check out his nonprofit organization, which supports youth-led initiatives.

“If you are so moved, you can get involved!” said Nance.

RELATED: A Whatcom County man traveled to Minnesota in a tractor to raise money for Parkinson’s research