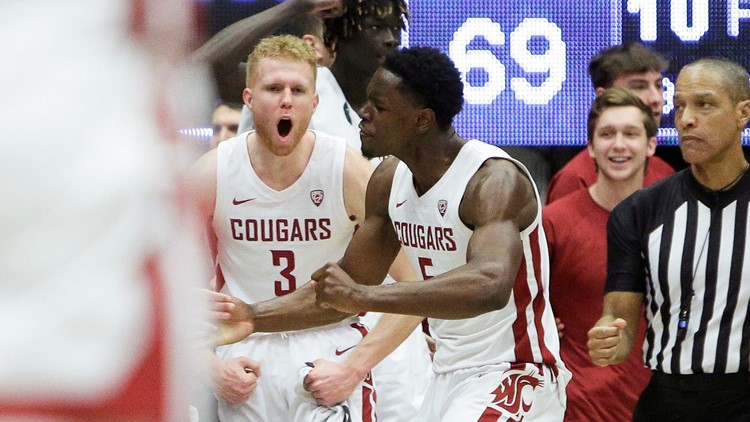 Jabe Mullins and DJ Rodman each had 16 points, Justin Powell added 15 points and seven assists, and WSU ended a 12-game losing streak against USC with an 81-71 win.

Mullins came off the bench to sink 4-of-6 from 3-point range and Powell hit 4-of-7 for the Cougars (6-9, 1-3 Pac-12 Conference). Rodman buried 3 of 6 from long range and connected 7 of 8 from the free throw lines. TJ Bamba started with 14 points and six boards. Mouhamed Gueye scored 12 goals and blocked three shots.

Mullins hit back-to-back 3-pointers in the middle of a 10-0 run and the Cougars went 13-11 in the first half for a 19-11 lead. Kobe Johnson’s three-point game ended the run and Drew Peterson followed with two straight baskets to draw USC to a point. Washington State responded with 3 points from Mullins, Andrej Jakimovski, Justin Powell and DJ Rodman to take a 31-22 lead at the 6:43 mark.

Mullins into the double digits! It drains you deeply!

Jabe has back-to-back double-digit performances in the first half.

Rodman sank the Cougars’ 10.3-pointer at halftime to take the lead to 34-24, and Mullins followed up with a basket from an offensive rebound. Gueye scored the last five points for WSU and the Cougars went into halftime with a 41-30 lead.

Reese Dixon-Waters had a three-point game to draw the Trojans to six points midway through the second half. But Gueye hit 1 of 2 free throws, Bamba had two layups in a row and Gueye followed up with a dunk to put the Cougars 61-48 with 8:06 to go.

TJ Bamba in upheaval! The Bronx man goes for back-to-back buckets and the whistle. Coug’s lead is in double digits.

Washington State grabbed its biggest lead of the game, 71-56, at Jakimovski’s 3-pointer with five minutes left, and the Trojans got no closer than eight from there.

WSU was coming off a heartbreaking 67-66 home loss to No. 11 UCLA. The Cougars missed their last nine shots and were beaten 14-4 over the final 7:23 against the Bruins.