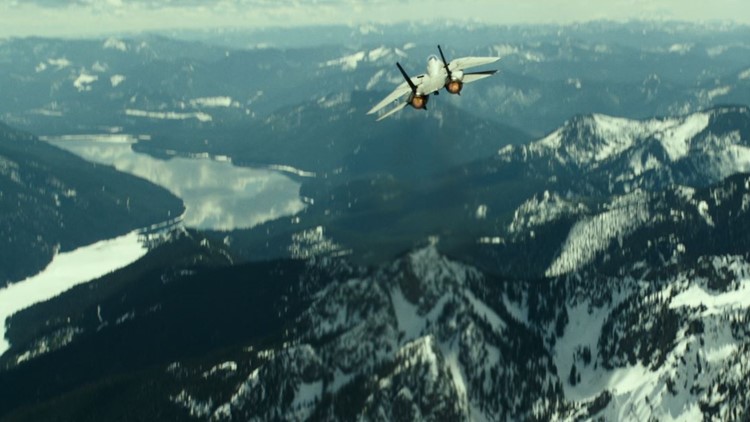 But he’s still a loner, at odds with his commanders – especially with “Cyclone,” played by Jon Hamm.

“It’s fun, and I never thought I would ever do it in my life,” Hamm said. “Tom is indeed an icon. He’s iconic at this point and being in a scene with him is almost an out of body experience. You have to somehow remind yourself to stay present.”

Mitchell is reunited with an old flame whose name die-hard fans might remember from the first film: Penny Benjamin. Jennifer Connelly was cast as the independent single mother and bar owner whose most surreal day on set was when she learned in a late script addition that she was going to be flying with Cruise.

A key new character has the callsign “Rooster” – an appropriate nickname since his father was Goose. Miles Teller earned the role for his acting, although his physical resemblances to Anthony Edwards shocked filmmakers.

“I think that was kind of a revelation for Tom and the directors,” Teller said. “Tom and I did a camera test and I had my flight suit on and my hair done and my mustache and Tom was like, ‘Oh my god, it’s crazy how much you look like Anthony and Meg’s (Ryan) kid.’ “

Location was everything for the flight scene, and the film’s third act was shot in Washington state. The Navy flies low-level training routes from NAS Whidbey Island through the Cascade Mountains – an ideal backdrop for critical combat scenes.

“The pilots themselves said they got kind of emotional on the flights because the mountains are so amazing there,” said Monica Barbaro, who plays Top Gun pilot “Phoenix.”

The film pays nostalgic homage to its predecessor and builds on its strengths. The cast hopes that 30 years from now, audiences will praise the sequel as much as they did the original.

“It’s like part of our cultural wallpaper,” said Charles Parnell, who plays Warlock.

Bashir Salahuddin, who plays Hondo, added, “I think this film will stand the test of time and exceed all expectations.”

Ashanti DENIES Being Lovers w/ Irv Gotti … Do You Believe HIM Or HER!!