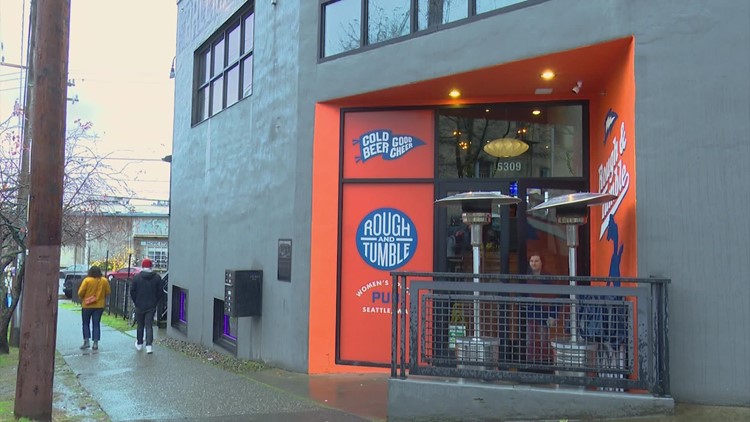 Rough and Tumble Pub is only the second bar in the US that specializes in women’s sports.

SEATTLE — Sports bring people together, but being able to watch women’s sports in groups, such as bars and restaurants, is uncommon.

“I can’t say how many times I’ve been to sports bars where I thought ‘There’s a huge women’s championship game, why are we randomly replaying this men’s soccer? ? Casey Cairo, a sports fan said.

However, the struggle with trying to find places to watch women’s sports on TV has now changed in Western Washington. Rough and Tumble Pub opens December 10 in Ballard. The owner said it was the first women’s sports pub in Washington and the second in the world.

“It was emotional. you know,” says Jen Barnes, owner of Rough and Tumble. “I was in tears and if I thought about it too much, I would probably start crying.”

The first two days after opening, the pub was full and even featured guests from local women’s professional teams, such as the Seattle Storm.

The pub is decorated with women’s sports memorabilia and has 18 televisions. The pub’s goal is to prioritize women’s sports on their TV, giving everyone a place to come together to enjoy and support women’s sports teams.

Barnes says it will broadcast all sorts of women’s games, with a particular focus on OL Reign, the Storm, and local college women’s sports teams. Barnes says sports games for women need to be more accessible. This is important for both fans and athletes, she said.

“This is what we deserve, we deserve to be equal,” Barnes said.

Others at the pub watching the Men’s World Cup on Saturday agreed that the space was needed.

“Seattle deserves a place like this,” said Stevie Jones, a sports fan at the pub. “It’s hard to find places to watch women’s sports.”

Fans say this type of pub will increase the visibility of women’s sports teams and increase support.

“With the success our women’s sports teams have had here in Seattle, it’s going to spread,” Jones said.

“In a lot of restaurants and venues displaying sports, usually mainly men’s football, men’s basketball, baseball, football. They don’t show much of a women’s sport. So I think they’re underrepresented,” said Davis Glass Hastings, a young man from Seattle who attended with his parents, brother and grandmother.

Hastings also appreciates that Rough and Tumble is also a place for families.

“It’s kind of a pub, but it’s open to all ages, which I love. It’s very comprehensive,” says Glass Hastings.

“Being able to go to a place like this and be surrounded by other people who like the same things and celebrate women’s sports together, is really cool,” Jones said.

Who will host 'Daily Show' after Trevor Noah's last episode?

‘Should not cost part of their soul’: Free food hubs are open 24/7 in King, Pierce counties