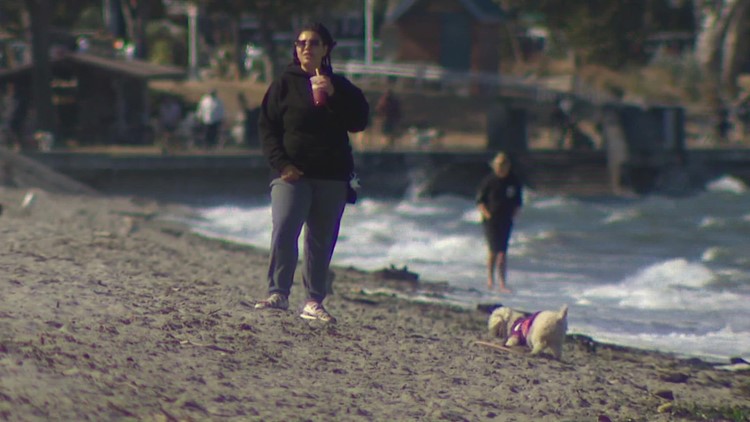 Alki Beach in West Seattle could see a lot more foot traffic following the long-awaited reopening of the West Seattle Bridge over the weekend.

SEATTLE — The reopening of the West Seattle Bridge could mean more people are returning to one of the neighborhood’s top destinations, Alki Beach.

It’s been rough water for those in West Seattle for the past two and a half years.

“Grim. Dark, dark,” said Matt Preedy, who has lived in West Seattle for more than 20 years.

Preedy said that when the bridge was closed, it was frustrating for him and the thousands of others who had to make an extra effort to get to his home court.

“It’s been tough because I play a lot of ball down here, but I live in West Seattle and a lot of the people I play with have to come here and that can take an hour to get here,” Preedy said.

Preedy is optimistic that now that the bridge is open, things will go smoothly.

“Honking at us and cars coming the other way, they’ve got their lights on, that’s just joy,” Preedy said. “It seems like such a small thing, but to have that kind of access when it’s that difficult is just huge.”

The reopening of the bridge isn’t just huge for commuter traffic. It’s also important for West Seattle businesses that are ready to welcome both new and old customers.

“The restaurants, the bars, the little local shops that we have here in West Seattle, and again it’s just more accessible since the commute times are shorter, yeah, I think it’s definitely going to bring more people here,” Lexi said ions the manager of Duke’s Seafood on Alki Beach.

Queen Elizabeth Religion: Was She Catholic? God Save the Queen Meaning