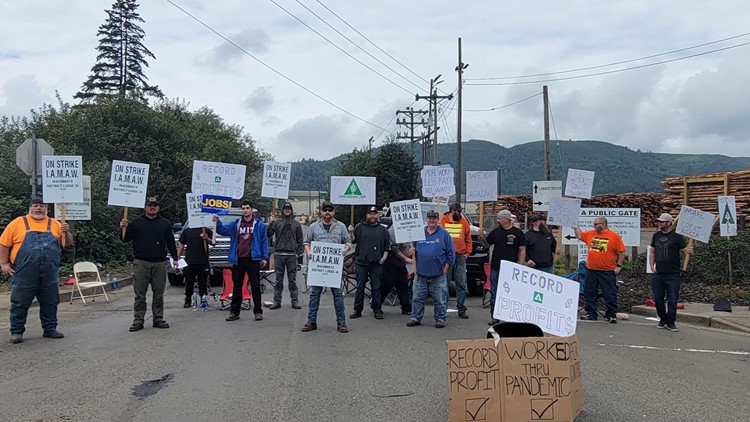 The Washington-based company announced a work stoppage Tuesday involving members of the International Association of Machinists and Aerospace Workers Union.

The Washington-based company announced a work stoppage Tuesday involving members of the International Association of Machinists and Aerospace Workers Union. Weyerhaeuser has approximately 1,200 union members, including employees from the company’s Wood Products and Timberlands organizations.

In a prepared statement, Denise Merle, the company’s senior vice president and chief administration officer, said they had been “formally involved in negotiations” with the union since May. According to the statement, the company made “several offers in connection with wages and social benefits”.

“After we submitted our latest bid, IAM workers at several locations went on strike last night,” Merle said. “While we are very disappointed in their decision to leave, we are committed to supporting our employees and negotiating in good faith with union representatives. We are ready to continue discussions to create a contract that is beneficial for employees and sustainable for the business cycle.”

Workers on a picket line in Washington told KING 5 they are striking for better health care and wages. All departments, they said, are on strike.

According to a letter from the union, negotiations with Weyerhaeuser about a new collective agreement that expired on May 31 began in April.

Weyerhäuser, according to the letter from the union, submitted a proposal on August 19. The proposal contained “a number of improvements” but “did not come close to what our members wanted or deserved”. The offer was rejected by union members.

Kodak Black Seemingly Blames PnB Rock's GF For His Death: That H*e Might As Well K*ll Herself!!

Thieves blew up ATM in Palmdale, but couldn’t get the money

Why the Pro-Lifers Lost in Kansas