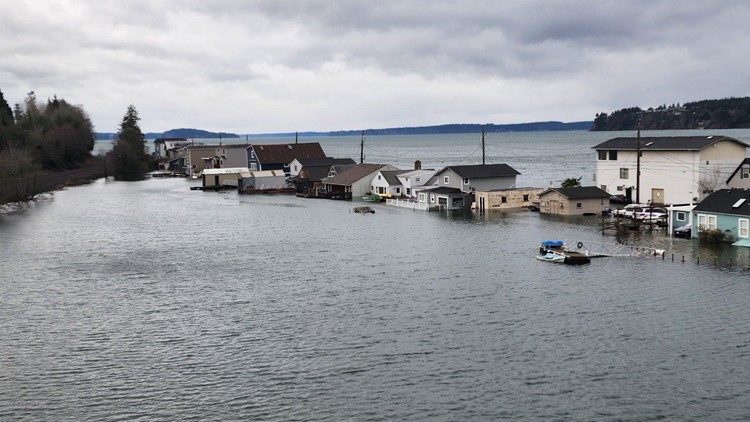 High tides are extremely high tides that can lead to coastal flooding, especially when combined with other weather factors.

SEATTLE — Western Washington fell victim to a double tide and heavy rainfall Tuesday morning, resulting in flooding in the lowlands from Anacortes to Olympia.

According to the National Oceanic and Atmospheric Administration (NOAA), king tide is a non-scientific term to describe unusually high tides. This is the highest tide predicted for the year and higher than the highest water reached at mean high tide, the Environmental Protection Agency said.

Tides, which are long-duration waves that wind around the Earth, are influenced by the gravitational pull of the moon and sun. That means higher-than-normal tides often occur during a new or full moon, which is when the moon, sun, and Earth are roughly aligned.

However, the tides are even higher when the moon is perigee, meaning it is closest to Earth in its monthly orbit. When this happens, it is called the perigean spring tide, as the king tide is more officially known.

Flooding does not always occur during high tides, but when combined with other factors, such as strong winds on the coast or changes in barometric pressure due to coastal storms, NOAA said. it can cause trouble.

That’s what happened in western Washington on Tuesday.

Tides are expected to be higher than normal through December 28, according to NOAA’s high tide bulletin. Perigean tides are also expected on January 18-26 and February 18-21. In January, some locations are expected to have their highest tides in 2023. .

Check the tide forecast near you on the NOAA website.

This Was the Year That Electric Vehicles Took Off

Stuck in St. Louis because of blizzard, Chaminade gets home

155,000 people to travel through Sea-Tac Airport for Thanksgiving