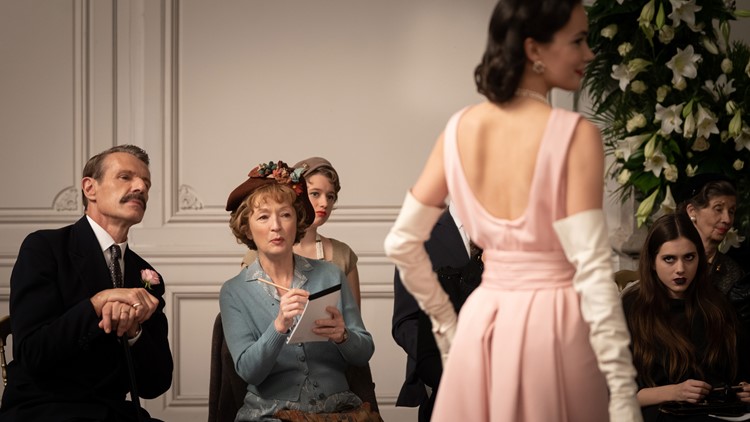 Other films that have stood out to critics include the Japanese animated film “Belle,” “Tár” led by Cate Blanchett, and the Korean black film “Decision to Leave.”

NEW YORK — The Associated Press screenwriters’ picks of Jake Coyle and Lindsey Bahr for the best movies of 2022:

1. “Descendants of the Sun”: Rarely has a story so refined and resonant made such a big splash. Charlotte Wells’ spectacular debut, starring newcomers Frankie Corio and Paul Mescal as an 11-year-old girl and her father on holiday in Turkey, is an accumulation of detail and The feeling is so closely watched that you barely notice the heartbreak that’s lurking inside. , in the end, completely knocks you down.

2. “Belle”: Despite its huge success in Japan, it’s easy to miss Mamoru Hosoda’s glorious anime in January, when it hits theaters in North America. It’s a wonderful combination of “Beauty and the Beast,” a girl’s painful battle with pain and self-doubt, and possibly the best movie ever made about the Internet. A lot, maybe too much, but “Belle” reaches its most beautiful climax.

3. “The Banshees of Inisherin”: Martin McDonagh’s latest work is a light-hearted allegory revolving around the existential conundrum. It takes place between a questioning Colin Farrell, a resigned Brendan Gleeson, an exasperated Kerry Condon, and a much-loved donkey. What else might you need?

4. “Decided to Leave”: Korean master Park Chan-wook marries a procedural and romantic cop, and the resulting noisy zigzag is both amusing and devastating.

5. “Descendant”: Margaret Brown’s expansive, poignant documentary echoes history and stories passed down through time. The central incident was the discovery in Mobile, Alabama, of Clotilda, the last known slave ship to dock on American shores. But Brown’s roaming wide-lens film is most powerful because of the way it engages the Clotilda descendants — a contemplative and compelling cast of characters — as they consider the present-day legacy of slavery.

6. “No Bears”: Jafar Panahi is possibly the most courageous and important filmmaker in the world today. The Iranian writer and director has been banned from making films or traveling since his arrest in 2010 for supporting protesters. Yet Panahi deftly continues to find ways to make contemplative, playful films that reflect his predicament while slyly capturing the Iranian society around him. “No Bears,” which dramatizes Panahi’s filmmaking along the Turkish border, is one of his best films, which has only become more acute since Panahi was jailed with a six-year sentence. In a chilling, emotional moment, Panahi stood on a dark frontier, intending to flee.

7. “Everything Anywhere All At Once” and “No”: In a cinematic world where spectacles are often accompanied by little things inside, both of these films are brimming with ideas and images. You could call Daniel Kwan and Daniel Scheinert’s film and Jordan Peele’s latest work too much. But their sheer cinematic richness has made them nutritious, lively exceptions. The same can be said of the equally visionary film “Avatar: The Way of Water” by James Cameron.

8. “Lingui, the Sacred Bonds”: Chadian filmmaker Mahamat-Saleh Haroun’s film is one of the most tender mother-daughter portraits of the year. Rihane Khali Alio and Achouackh Abakar Souleymane star in this incredibly vivid story, set in the suburbs of present-day N’Djamena, about abortion, motherhood and women’s solidarity.

9. “The Fabelmans”: Steven Spielberg’s natural style as a filmmaker may not be introverted. Historically, he was not one to call home. And while that awkwardness can sometimes be felt in his cinematic memoirs, there are many scenes here unlike any he’s ever filmed before, and are among those his best.

10. “Kimi”: The great benefit of so-called “pandemic movies” is that they are made quickly, loosely, and in time. This year, many filmmakers, possibly as a result of the long shutdown, have released introverted films. Often better are those that are more directly related to the pandemic reality around us. Steven Soderbergh’s leggy thriller starring Zoë Kravitz as a claustrophobic tech contractor deftly turns time into a fascinating little pop gem.

1. “The Banshees of Inisherin”: Martin McDonagh’s film is a sharp, funny and downright devastating work about the end of a friendship on a small Irish island. Colin Farrell uses his amazing eyebrows (and acting chops) to ensure utter heartbreak as the world and his sense of self crumble and rot. But it was the group, consisting of Brendan Gleeson, Kerry Condon, Barry Keoghan and below, who imbued this seemingly simple setup with gravity and depth.

2. “Tár”: Todd Field’s brilliant, relentless “Tár” reminded me how much I love cinema (and tricked me into believing I was some sort of classical music scholar for a few days. hour). Cate Blanchett is transcendent in bringing this defective genius to life, challenging the audience to consider the big questions of power, status, and art. It’s a demanding but incredibly rewarding cinema that’s not easily defined, which is probably why audiences didn’t get a chance to see it in theaters (which was a mistake).

3. “Women Talking”: Sarah Polley’s movie hasn’t even been released to the public yet and it’s already considered “divisive”, which is one of the best reasons to look for it. Curious which side you’ll be on? I am mesmerized by her frenzied, spiritual vision of a group of abused women in an isolated religious colony questioning their reality and wondering if life by something may be different from what they know.

4. Aftersun: In a year filled with autobiographical films by very famous names, it was the anonymous film that made the biggest impression. You don’t have to know anything about Charlotte Wells to get hooked on “After the Sun,” an inspiring and fully realized piece of memory of an ordinary vacation some 20 years ago that will make you leave. incoherent (which is somehow still possible even with “Macarena” stuck in your head).

5. “Saint Omer”: A young woman is on trial for the death of her 15-month-old daughter in this haunting French courtroom drama, a brilliant debut by documentary filmmaker Alice Diop, will change your perception of the genre. in examining trauma, immigrant experiences, and maternal expectations.

6. “Mrs. Harris Goes to Paris”: It’s a bit of an unfamiliar romantic pastry on a list like this, but that’s why it’s here. Anthony Fabian’s film about a cleaner British homemaker and wartime widow (Lesley Manville) in the 1950s, who saved enough money to travel to Paris to buy a Christian Dior couture dress was a balm — warm heart without crass, reveres the art of haute couture but criticizes its exclusionary ways and is just a sheer pleasure.

7. “Kimi”: Sorry “Top Gun: Maverick,” you’re fun too, but Steven Soderbergh’s “Kimi” is my favorite popcorn experience of the year — a tense, paranoid thriller with a twist. modern, Alexa/Siri-inspired shoot of “Blow Up” overheard crime script, with a sharp performance by Zoe Kravitz, who can even shut down a phobia extremely wonderful.

8. “Murina”: There’s rot beneath Croatian filmmaker Antoneta Alamat Kusijanovic’s beautiful, sun-drenched Adriatic, the Croatian filmmaker’s menacing debut about a 17-year-old girl age began to question the ingrained hatred of women around him. The family dynamic is as edgy and dangerous as the picturesque backdrop.

10. “White Noise”: The supermarket dance to LCD Soundsystem’s “New Body Rhumba” might not happen until the end of Noah Baumbach’s Don DeLillo adaptation but has a brilliant rhythm to the entire history. competition, from the controlled chaos of overlapping dialogue to the hectic choreography of a family making breakfast. But perhaps most surprising is that behind all the wit, style, commentary on American society and the banal and poignant things of everyday life, there is a real emotional weight.

I'm a flight attendant & I never travel without these five things

Australia to Remove British Monarchy From Its Bank Notes

US to send $3.75B in military aid to Ukraine