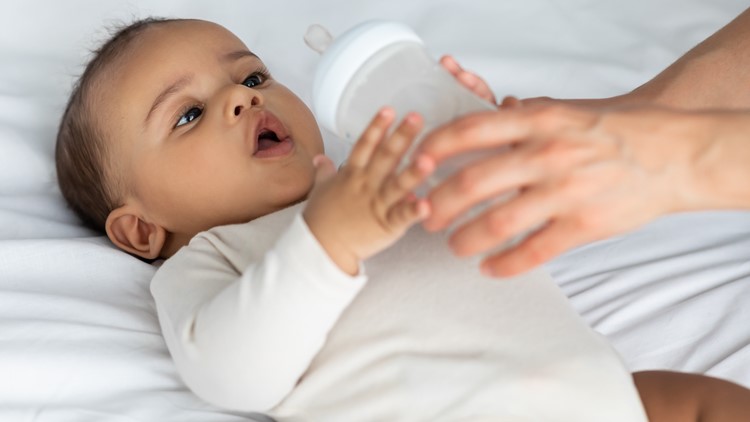 What can parents do if their baby formula brand isn’t available? Is homemade formula a safe option? VERIFY answers your questions during the shortage.

Parents across the country are struggling to find baby formula due to a nationwide shortage.

This has prompted many questions from our VERIFY viewers. Some have asked us what options exist for parents if their trusted formula brand is out of stock. Others have wondered if homemade formulas are safe or whether parents can feed cow’s milk to their babies.

We are answering six common questions about the baby formula shortage and explaining what parents can do to combat its effects.

Sign up for the VERIFY Fast Facts daily Newsletter!

1. Was there a flood at Abbott Nutrition’s baby formula plant in Michigan?

On Monday, June 13, storms tore through southwestern Michigan, bringing heavy rains, high winds, hail, power outages, and flooding due in part to overwhelmed stormwater systems. The flooding extended to Abbott Nutrition’s baby formula factory in Sturgis, Michigan, which had recently reopened after being shuttered for several months, the company said on its website. The closure contributed to the nationwide baby formula shortage.

Abbott Nutrition, a large manufacturer of baby formula products, has stopped production of its EleCare specialty formula that was underway in order to assess damage caused by the storm and clean and resanitize the plant following the flooding. This will likely delay production and distribution of new products for a few weeks, the company said, though there is “ample existing supply” of EleCare and most other specialty formulas to meet current needs until new product is available.

Once operations restart, the factory will begin by producing EleCare and other specialty formulas. Abbott says it also plants to restart production of its Similac baby formula “as soon as possible” at the Michigan plant.

2. Why is there a baby formula shortage?

There have been baby formula shortages in U.S. stores throughout the COVID-19 pandemic, said Steven Abrams, M.D., professor of pediatrics at the University of Texas Dell Medical School. The shortages, due in part to supply chain issues, have recently been exacerbated by recalls of several formula products.

“Inflation, supply chain shortages, and product recalls have brought an unprecedented amount of volatility for baby formula,” Ben Reich, founder and CEO of Datasembly, said in a report about the baby formula shortage on April 13. “We expect to continue to see the baby formula category being dramatically affected by these conditions.”

In February 2022, Abbott Nutrition, announced a major recall of some products. The company recalled Similac, Alimentum and EleCare powder formulas manufactured in the company’s Sturgis, Michigan, facility on Feb. 17, followed by another recall for one lot of its Similac PM 60/40 on Feb. 28.

The recalled products should no longer be for sale, according to the FDA. But parents who have these products in their homes should check the lot code on the bottom of the package to determine if they are included in the recall. The FDA has a full list of recalled brands on its website.

RELATED: Yes, there is a shortage of some baby formula products in the U.S.

RELATED: Yes, 4 companies control a majority of the infant formula industry in the US

3. What should parents do if their baby formula brand is out of stock?

If your trusted formula brand is out of stock, you still have options. First, call your OB-GYN or pediatrician to see if they have any in-office baby formula samples or ask if they can suggest a formula that may be more readily available and is nutritionally similar to their baby’s typical formula, according to guidance from the U.S. Department of Health and Human Services (HHS).

Generic formula brands from a grocery store or pharmacy as an alternative to your baby’s normal brand are “equally effective and safe to use,” pediatrician Ilan Shapiro, M.D., told VERIFY. Shapiro also suggested breast milk banks, where other parents are giving away their breast milk, as an option if the baby’s formula brand isn’t available.

The Human Milk Banking Association of America has a map and list of 31 member milk banks throughout the country online.

Donated breast milk is very safe. Mothers are tested for any illness that could pass through their breast milk before they donate it and containers of milk are tested for harmful bacteria, the American Pregnancy Association says.

Babies can also begin eating solid foods that can complement, or add to, breast milk or formula at about six months old, the Centers for Disease Control and Prevention (CDC) says on its website. By the time your baby is about 7 or 8 months old, you can introduce them to a variety of different foods, including infant cereals, meat, fruits, vegetables, grains, yogurts and cheese, among others.

The American Academy of Pediatrics (AAP), HHS and other medical experts warn against diluting formula with water or making baby formula at home, as some on social media have suggested. Homemade baby formula is not safe and does not meet babies’ nutritional needs. Infant deaths have been reported from the use of some homemade formulas, according to the AAP.

The U.S. Food and Drug Administration (FDA) also advises parents to not give babies homemade infant formula because of serious health and safety concerns, including contamination, nutritional imbalances and foodborne illnesses.

RELATED: No, homemade baby formula is not safe for babies

5. Can babies have cow’s milk instead of formula?

Parents shouldn’t feed cow’s milk to babies 6 to 12 months old, except in an emergency when every other option has been exhausted.

The CDC and the AAP recommend that babies be introduced to cow’s milk at 12 months old, but not before then and never as the child’s main source of nutrients.

Cow’s milk has too many proteins and minerals for a baby’s kidneys to handle and does not have enough necessary nutrients, the CDC says. It could also put the baby at risk of intestinal bleeding.

“Cow’s milk does not provide enough iron for babies and it can cause them to become anemic. And it also has a lot of different solutes like protein and different things that the kidneys don’t process very well in infants. So we don’t recommend cow’s milk for kids under 1 year old,” Rachel Dawkins, M.D., a pediatrician at Johns Hopkins All Children’s Hospital, told VERIFY.

Parents may be able to feed cow’s milk to some babies between 6 and 12 months old if other formula alternatives are unavailable during the ongoing shortage, but this shouldn’t be a long-term solution.

Abrams wrote on the AAP’s parenting website that cow’s milk may be an option for children older than 6 months who are usually on regular formula if other alternatives aren’t available. This does not apply to babies who need specialty formula products for allergies or have other special health needs.

“In a pinch, you could feed them whole cow’s milk for a brief period of time until the shortage is better. This is not ideal and should not become routine. However, it is a better option than diluting formula or making homemade formula,” Abrams said.

6. What about goat’s milk and plant-based milks?

Some parents have also asked VERIFY about whether they can feed babies goat’s milk or plant-based milks.

Goat’s milk is not approved as an alternative feeding option for babies in the U.S. However, there are some goat milk-based baby formulas in other countries that the U.S. Food and Drug Administration (FDA) may consider for accelerated import approval, Abrams said.

Additionally, some plant-based milks like almond milk are not recommended as baby formula alternatives, as they don’t have enough protein or healthy fats that babies need for brain development.

7. Will Amazon ship formula from Canada to the U.S.?

Some social media users are advising people who can’t find their baby’s formula to switch their Amazon accounts from the U.S. to Canada.

VERIFY found that Amazon won’t ship baby formula from Canada to the U.S. Though some third-party sellers who sell their items independently on Amazon may do so, experts warn against buying formula products from other countries.

VERIFY tested the social media claim by trying to purchase a baby formula product sold and shipped by Amazon.ca and ship it to an address in Washington state. We received an error message that said the item could not be shipped to the selected address.

Third-party sellers can sell their items independently on Amazon. If their items aren’t fulfilled by Amazon, the seller will ship the order to you and handle customer service. VERIFY found some third-party sellers on Amazon who are selling baby formula products for high prices with quoted shipping prices to the U.S. of more than $30.

Though some third-party sellers on Amazon Canada may ship baby formula to the United States, medical experts like Jennifer Lightdale, M.D., a pediatric gastroenterologist at UMass Memorial Children’s Medical Center, warn against it.

“The formula that you’re buying from overseas is just not regulated the way we’re used to formula being regulated here in the United States. So even though things have clearly gone a little bit wrong right now, overall, we are used to high standards of quality and our government in general has done a great job of making formula very safe,” Lightdale said.

8. Is it possible to reestablish breastfeeding after stopping?

Amid the baby formula crisis, many parents are asked, “Why not just breastfeed?”

Resuming breastfeeding after stopping, which is called relactation, is possible in some cases but difficult. Even if it works, breastfeeding might not yield enough milk to fully feed the baby, so supplementing with formula or donor milk might be necessary.

“The longer it has been since a parent breastfed or made milk, the more difficult it is. This is why I’m really encouraging families right now that if you’re currently lactating, continue to do so to the point that you’re able,” certified lactation consultant Beth Sanders, BSN, RN, said.

As breastfeeding slows or stops, the body signals the brain to produce less milk, eventually drying up the supply. That’s why relactation is most successful if done within a few weeks of stopping, Sanders said.

RELATED: Yes, relactation is sometimes successful, but it’s not a solution to the baby formula shortage

9. What is the U.S. government doing to address the baby formula shortage?

The Biden administration is sourcing flights through its Operation Fly Formula missions in order to bring baby formula from overseas to the U.S. On Thursday, June 9, 110,000 pounds of Nestlé SupremePro Stage 1 baby formula – approximately 1.6 million eight-ounce bottles – will arrive in Fort Worth, Texas. The formula will be available across the country and additional flights will be announced in the coming days, according to the White House.

The FDA is also making it possible for Nestlé to export more specialty and standard baby formula into the U.S.

Additionally, the Biden administration has invoked the Defense Production Act and entered into a consent agreement with the FDA to reopen Abbott Nutrition’s Michigan factory that’s been tied to the baby formula shortage.

The VERIFY team works to separate fact from fiction so that you can understand what is true and false. Please consider subscribing to our daily newsletter, text alerts and our YouTube channel. You can also follow us on Snapchat, Twitter, Instagram, Facebook and TikTok. Learn More »

PA Senate Candidate John Fetterman Reveals He Had a Stroke