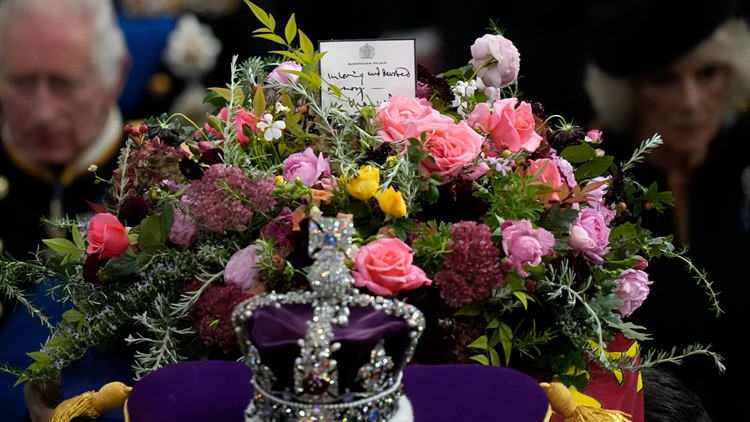 The note continues a tradition at royal funerals where a loved one writes a note to the deceased and leaves it on their coffin.

LONDON, UK – Eagle-eyed viewers at the funeral service for Queen Elizabeth II may have spotted a piece of paper lying on top of the bouquet that adorned the late monarch’s coffin.

The card is a handwritten note from King Charles III. to his mother. It reads simply, “In loving and devoted memory. Charles R.”

The R after Charles’ name stands for rex, which is Latin for king. Elizabeth was known as Elizabeth R, with her R standing for Regina or Queen in Latin.

The suicide note is part of a tradition at royal funerals. Elizabeth herself wrote a note for her late husband, Prince Phillip, when he died last year. Although the entire content of this message was not caught on camera, it ended with “Loving memories, Lilibet,” which referred to her childhood nickname.

At Princess Diana’s funeral in 1997, her son Harry wrote a note to his “mom”.

Also on the coffin were the Imperial State Crown, the scepter and orb, and the Royal Standard – all symbols of her authority as head of the British Church, Government and country.

It is the latest in a series of personal tributes to the Queen’s four children and other members of the royal family.

Prince Andrew paid tribute to his mother, Queen Elizabeth II, in a statement, saying he will forever cherish “your love for a son, your compassion, your care, your trust”.

Andrew addressed the late monarch as “Mama, Mama, Majesty” and said: “It has been an honor and a privilege to serve you.”

On Saturday, Princesses Beatrice and Eugenie issued a statement praising their “beloved grandma”.

“We thought, like many others, that you would stay here forever. And we all miss you terribly. You were our matriarch, our guide, our loving hand on our back, guiding us through this world. You have taught us so much and we will forever cherish those lessons and memories,” the sisters wrote.

https://www.king5.com/article/news/nation-world/note-queen-elizabeth-coffin-king-charles/507-4083ecfd-9bb2-46e7-be69-eeee014abada What was written on the note on Queen Elizabeth’s coffin