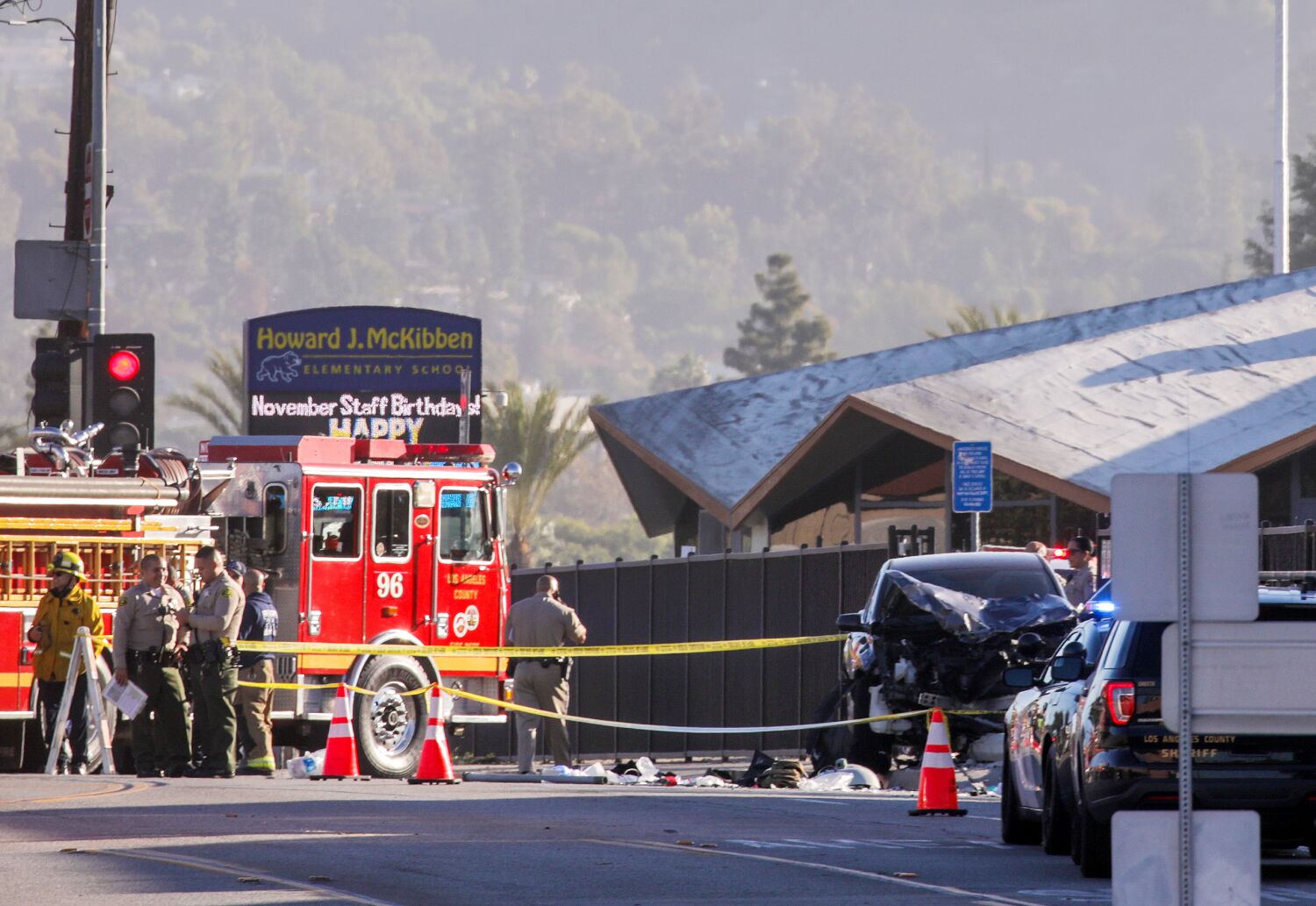 Just after sunrise Wednesday, a 22-year-old driver of a Honda CRV drove into a large group of Los Angeles County Sheriff’s Department recruits who were on a training run in South Whittier. Dozens were injured, at least five of them critically, authorities said.

The California Highway Patrol is conducting an investigation into the accident.

Here’s what we know so far.

When and where did the crash happen?

Dispatchers received a call just before 6:30 a.m. about an accident involving pedestrians in the 10600 block of Mills Avenue, the Sheriff’s Department said.

Recruits were running in four columns near Mills Avenue and Trumball Street when a vehicle approached the group at 30 to 40 miles per hour, Sheriff Alex Villanueva said. The vehicle was going the wrong way, said Los Angeles County Fire Chief Sheila Kelliher.

What happened after that?

Video taken by a man who lives across the street from the accident showed recruits frantically trying to treat the most seriously injured, who lay immobilized and bleeding on the ground while smoke still billowed from the driver’s SUV.

Voices crying out for more help and giving directions can be heard as groups of those less injured gathered around the most seriously injured and attempted to render assistance. Some of the recruits were paramedics, and at least one in the group was a registered nurse.

Several deputy recruits were also able to knock on the door of a fire station 500 feet from the crash site and ask for help, said Anthony Marrone, interim chief of the Los Angeles County Fire Department.

What triggered the crash?

The cause of the crash, including a motive behind it, is under investigation.

Authorities said the driver headed south on Mills Road before turning northbound, where a group of about 75 recruits were jogging in a large formation. The runners were escorted by two black and white police cars. Eight street wardens wearing safety vests were also present.

The recruits at the head of the pack saw the SUV speeding toward them and dove out of the way, authorities said. Those at the end of the formation did not see the oncoming vehicle before the driver plowed through them and then crashed into a light pole, throwing it to the ground.

The pole stopped the car’s momentum and prevented the vehicle from hitting other recruits, authorities said.

The driver, who has not been identified, was arrested at the scene by cadets.

Authorities did not detect any odor of alcohol on him, and he blew “a 0.0” during a breathalyzer performed at the scene, Villanueva said.

Who are the recruits?

The 75 deputy sheriff’s recruits are Class 464 members of the STARS Center Academy, a training center in South Whittier. Recruits from police departments in Bell, Pasadena, El Segundo, Glendale and UCLA were also in the group running, Villanueva said.

About 10 of the recruits are women, authorities said.

This was the group’s eighth week of training, Villanueva said. The program lasts 22 weeks.

How bad are the injuries?

25 recruits were injured in the crash, authorities said. At least five were taken to hospitals in critical condition.

Villanueva called the injuries “life-changing” and said they included head trauma, broken bones and “some loss of limbs.” One of the five critical patients was on a ventilator.

The driver also suffered minor injuries, including abrasions, and was taken to a hospital.

Who is the driver?

The driver is a 22-year-old man from Diamond Bar. Authorities did not release any further information about him on Wednesday.

Investigators are investigating his background and have learned that his uncle is in law enforcement. They say his initial behavior may indicate he was under the influence. They also said they found marijuana in his vehicle.

Have charges been brought?

No charges were announced in the incident.

https://www.latimes.com/california/story/2022-11-16/what-we-know-about-the-crash-that-hurt-25-sheriffs-recruits What we know about the crash that hurt 25 sheriff’s recruits

Meridian Elementary School in Kent closes after standoff at home

In pursuit of oil and Mideast security, Biden to meet with Saudis he once regarded as pariahs