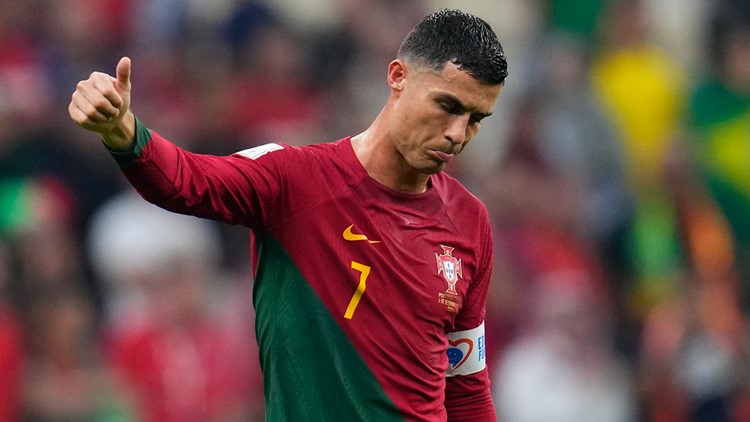 It was one of Portugal’s greatest victories, and yet it felt like Ronaldo could hardly leave the field fast enough and left while his teammates continued to celebrate.

Football’s most prolific modern goalscorer might yet be, at the age of 37 and probably in his last game World Championshipclaiming the one great title to evade in a career unlike any other.

It didn’t quite feel that way, however, as he walked off the field alone at the Lusail Stadium, leaving the rest of the Portuguese side to celebrate progressing to the quarter-finals after a 6-1 win over Switzerland on Tuesday.

It was actually quite a sad sight. A veteran in decline who leaves the scene while his teammates – some barely half his age – keep partying.

These have been tumultuous and painful weeks for Ronaldo.

First came the explosive interview with Piers Morgan that shaped the start of his fifth World Cup season. Then the fallout that involved the termination of contract at Manchester United.

As the tournament got underway, he broke a record – becoming the first male player to score at five different World Cups – and then found himself underchallenged, failing to score in consecutive games and responding to a substitution against South Korea by giving his Displeasure showed and upset his coach.

Then came Tuesday night and the moment that might be looked back on as the beginning of the end of his glittering, record-breaking international career. Not only was he dropped from the starting line-up, but the 21-year-old player who replaced him – Goncalo Ramos – scored a remarkable hat-trick.

Can you imagine the thoughts going through Ronaldo’s mind as he trotted off as a substitute around 20 minutes into the game?

It was one of Portugal’s greatest wins – in fact, it was the country’s greatest win in a World Cup knockout game – and it felt like Ronaldo could hardly get off the field fast enough.

Where is Ronaldo? Already without a club, he should be the second choice for Portugal after Ramos, who made his Portugal debut just three weeks ago.

Portugal manager Fernando Santos threw a lifeline at Ronaldo and said he will continue to select players based on opponents’ strengths and weaknesses. But it’s unthinkable that Ramos now loses his place for the quarter-final game against Morocco.

“I’ll use what I think is the right strategy, like I’ve done all my life,” said Santos, as optimistic as ever.

Significantly, Santos praised his team for playing “with great fluidity” and “as a collective.” This style is more difficult to forge when Ronaldo, whose mobility just isn’t that great anymore, is the sole forward.

His offside goal against Switzerland was an example of a player trying to steal a few yards to make up for his lack of pace and it’s not the first time this has happened at this World Cup.

Meanwhile, in his first World Cup start – in fact, it was his first start in international football – it took Ramos just 72 minutes to show he could be the future. His degree, interplay and off-ball work underscored why he is being dubbed as one of the next big stars in Portuguese football.

Portugal midfielder Bruno Fernandes said before the game against Switzerland “most people in the world had never heard of him”.

Well they have now and expect Benfica will be busy investigating a forward who will score 21 goals for the team in 2022 and just clinched their first hat-trick in a World Cup knockout round since Tomas Skuhravy for Czechoslovakia in the year 1990 achieved.

While some of the top clubs lure Ramos, Ronaldo appears to be aiming for the obscurity of the Saudi Arabian league, albeit with an exorbitant salary.

It’s quite an autumn for a man who pushed for a move from United last summer because he wanted to play in the Champions League.

Is he going there as a world champion? Perhaps because Portugal showed as dynamic a performance against Switzerland as Brazil did against South Korea the night before.

And there remains the tantalizing prospect of a title match between Argentina and Portugal. One that has invariably been described as a neck-and-neck race between Ronaldo and his longtime rival Lionel Messi.

But what is perhaps eating away at the Portuguese superstar, what he may have been thinking as he left the field at the Lusail Stadium, is that Messi is leading Argentina to that final frontier with goals and brilliant performances, however Ronaldo is no longer the player’s carrier his National team.

Ronaldo could even be a liability considering how Portugal performed against Switzerland without him.

Zodiac Signs as “Wednesday” Characters—Which One Are You?