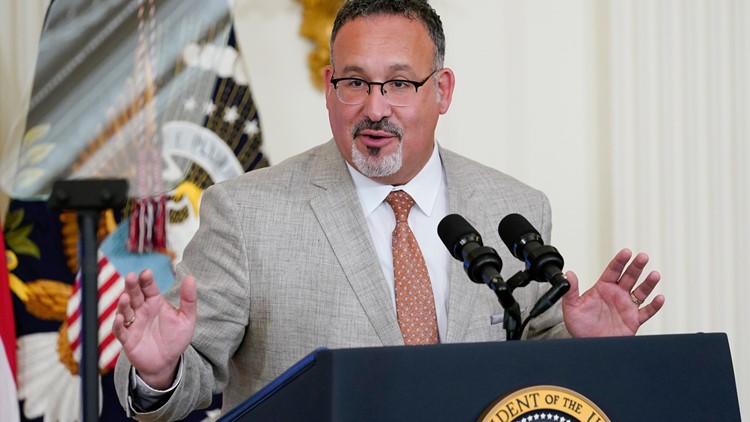 The multi-year pause in federal student loan payments expires next week on August 31.

WASHINGTON — With just over a week to go until the deadline, the US Secretary of Education says Americans can expect an announcement on student loans “in the next week or so.”

The year-long pause in federal student loan payments ends Wednesday, August 31, and millions of Americans are eager to see if it will continue — and if a more permanent solution is in the works.

“We know that August 31 is a date that many people are waiting to hear,” Secretary of Education Miguel Cardona said on NBC’s Meet the Press show on Sunday. “We’ve talked about it daily, and I can tell you the American people will be hearing about it within the next week or so.”

Cardona, who made a similar statement last week, declined to share any further information.

“I’ll tell you, the American people will be hearing from us directly because we recognize this is an important issue across the country,” he said.

This is by far the closest deadline to pass during Biden’s presidency without an update — including Biden’s extension of the hiatus on his first day in office.

The Trump administration initially gave Americans the option to suspend loan payments in March 2020 due to “stay-at-home” orders implemented in the early days of the COVID-19 pandemic, and Congress made it automatic soon after. It was extended several times under both administrations.

According to recent Department of Education data, more than 43 million Americans owe a total of $1.6 trillion in student debt held by the federal government. This includes more than 7 million borrowers who have defaulted on student loans, meaning they are at least 270 days late on payments.

During the moratorium, borrowers were not required to pay and interest rates remained at 0%.

Announcing the latest extension in April, Biden said the country “is still recovering from the pandemic and the unprecedented economic disruption it has caused.” He said Federal Reserve data suggested many Americans would face significant hardship and financial instability if payments resumed on schedule.

Will Biden give out student loans?

Aside from the break, questions remain as to whether Biden will seek sweeping student debt relief.

Biden previously said he supports canceling up to $10,000 but argued it should be done through congressional action. Negotiations have dragged on for months, with some Democrats calling on the President to do more and Republicans opposing mass debt cancellation efforts.

The White House said Biden would make a decision on student loan forgiveness by the end of August, after the president initially said in April he would announce a decision within “a couple of weeks.”

So far, the Biden administration has taken a more targeted approach to debt relief, focusing primarily on students who have been “misled” by for-profit colleges.

Are Omicron subvariants BA.4.6 or BA.2.75 threats to California?

Afghanistan’s money is crumbling to pieces like its economy

Slapgate Update: As Chris Rock Turns Down 2023 Oscar Hosting Duties After Getting Slapped By Will Smith