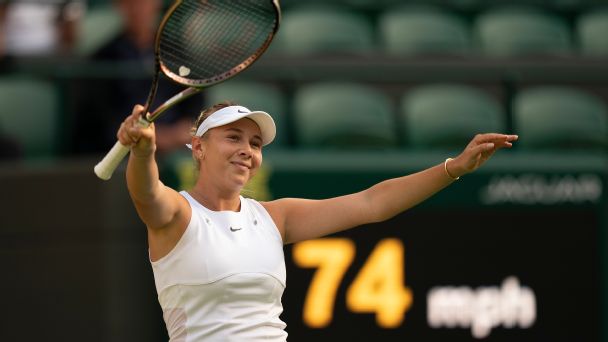 LONDON — Amanda Anisimova won her fourth-round match at Wimbledon on Monday and then asked her coach how her fellow Americans were doing at the tournament.

He broke the news to her: she was the only remaining pawn and one of two Americans left in the singles draws, joining Taylor Fritz, who won earlier in the day.

She couldn’t believe it.

“[It’s] kinda surprising to me because we just have such a strong team of girls from America doing so well right now,” said Anisimova. “But I’m glad at least Taylor won today July 4th.”

Anisimova, 20, and Fritz, 24, are now the United States’ last remaining hopes for the singles trophies at the All England Club and both will play in the quarter-finals on Wednesday. The two have experienced the ups and downs of life as professional tennis players and while both believe they have more to achieve this week, both can’t help but be grateful for what they’ve already achieved.

“All the hard work I’ve put in, all the things I’ve done, it’s paying off,” Fritz said on Monday. “It feels incredible. Doesn’t even seem real. I’m in the Wimbledon quarter-finals.

“I’ve worked for things like this my whole life. It’s great to kind of suck it up and feel like it’s kind of paying off and I’m moving in the right direction.”

It’s a memorable 4th of July for Fritz and Anisimova as they both advance to their first Wimbledon Quarterfinals #Wimbledon pic.twitter.com/Th0my4NTYM

Anisimova made her breakthrough at the French Open in 2019, reaching the semifinals at the age of 17. Attention was immediate and she became a frontrunner as the future face of American tennis as Serena and Venus Williams inevitably retired. But the sisters are still playing, and Anisimova has yet to hit the major stage.

Instead, as other American women have stepped into the limelight, she has grappled with tragedy and bad luck.

Just months later, a week before the US Open, Anisimova’s father Konstantin, who had also been her coach, died unexpectedly of a heart attack. She retired from the tournament and did not play much for the rest of the year. She returned for the 2020 season, but much of that year’s play has been suspended and impacted by the pandemic.

Anisimova tested positive for COVID-19 at the start of the 2021 season and was unable to play at the Australian Open. She lost in the first round at both the French Open and Wimbledon. Her ranking plummeted to 78 by the end of the year. But this season was different. She reached the final at a tournament in Melbourne to start the year and at the Australian Open she beat Naomi Osaka, the defending champion, to reach the fourth round. There was a semi-final in Charleston and another round of 16 in Paris.

But Wimbledon has been the site of her best tennis to date and this time around she knows how special that is.

“I think when I was 17 I didn’t appreciate getting into the semis as much as I probably should,” Anisimova said after her 6-2, 6-3 win over Harmony Tan on Monday. “I think it just bled in like a year later to understand what that was, how much it actually meant to me. Yeah, just going over a year with not very good results really affects you. It motivates me a lot to train harder and just work harder.

“But when you’re losing in the first few rounds every week, it’s very hard to find that motivation. I just kept going. It just took longer than I thought. That’s why it means so much to me now that I’ve had a great year this year.”

Amanda Anisimova is back in a Grand Slam QF! 🙌 pic.twitter.com/VEmSUMy4YF

As with Anisimova, expectations have long been high for Fritz. A celebrated youth player, he won the US Open title in 2015 and was a finalist at the French Open that same year. He reached his first ATP final in Memphis in 2016 and cracked the top 100 soon after. In the star-starved world of American men’s tennis – where Andy Roddick remains the last compatriot to have won a Grand Slam title in 2003 – Fritz shone to be the next true hope.

Fritz won his first title at Eastbourne in 2019 and reached two more 250 level finals by the end of the year. His ranking would continue to climb, but he didn’t win another title for nearly three years and struggled on the sport’s biggest stages. He had never advanced past the third round at a major this season. Along the way there have been injuries, including a torn meniscus at the 2021 French Open – he left the court in a wheelchair – and a left foot problem earlier this spring, as well as doubts about his toughness and ability to win when it counts.

But this year things started to work for Fritz. He reached the round of 16 at the Australian Open and won the title in March in Indian Wells in a straight set final against Rafael Nadal. Calling it a “crazy childhood dream,” he rose to No. 13 in his career. Last month he won his second title on grass at Eastbourne. During his streak with the All England Club, he is the only remaining male player not yet to drop a set. He is the first American to reach the quarterfinals at a Grand Slam since Tennys Sandgren at the Australian Open in 2020 and the first not to drop a set since Roddick did so at Wimbledon in 2007.

Taylor Fritz is in the best shape of his life 👏

The American advances to his first Grand Slam quarterfinal with a set win over Jason Kubler#Wimbledon | @Taylor_Fritz97 pic.twitter.com/8keOczkO5E

Although they have impressed with their endurance and fight so far, it will not be easy for either Anisimova or Fritz to advance to the semifinals. Anisimova plays 2019 Wimbledon champion Simona Halep, who appeared in renewed form in her 60-minute loss to Paula Badosa on Monday, and Fritz takes on Nadal again, the 22-time Major champion and one of the greatest players history.

Anisimova defeated Halep in their first career meeting in the quarter-finals at Roland Garros in 2019 but has lost their other two games including Bad Homburg last month.

“I know we have a really tough game ahead of us but I’m looking forward to it,” said Anisimova. “I’m sure we’ll both put up a really good fight.”

Fritz has a shared record of 1-1 with Nadal and he won their last meeting in Indian Wells. But acknowledging that Nadal was struggling with a rib injury that day and Wednesday was a best-of-five-set match, he knows it’s going to be a tough fight. Still, like Anisimova, he seemed more than up to the challenge and ready to take on the potentially career-defining occasion.

“I feel like the decision making is easy [against Nadal]’ said Fritz. “I don’t value my shots as much as I would when playing against someone I’m supposed to beat. I might be thinking, ‘Should I try this, should I play it safe? Against someone like Rafa, it’s easy to always make the aggressive decision and play more freely…

“We have to be the more forceful team, not shy away from contact and play inside-out”