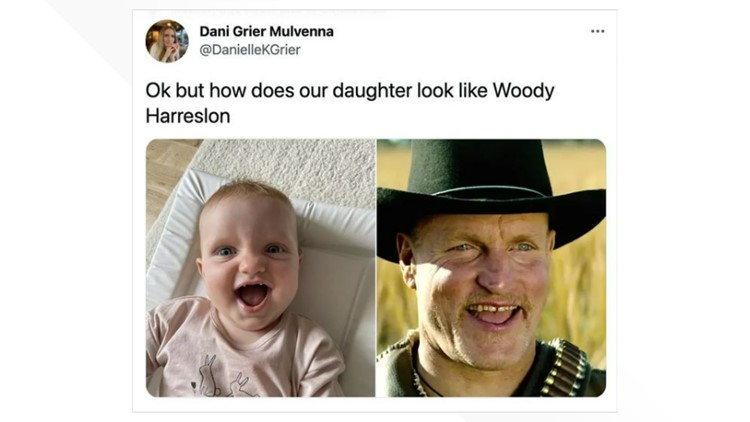 A mother in Northern Ireland tweeted about her 9-month-old daughter’s celebrity look-alike and the actor responded in the cutest way.

NEW YORK — There are many people who think they have a celebrity lookalike, but not many can say they got their famous lookalike to agree.

A 9-month-old girl in Northern Ireland just happens to look exactly like Woody Harrelson, and the actor sees the resemblance himself!

Dani Grier Mulvenna posted about the celebrity look-alike on Twitter.

“Okay but how does our daughter look like Woody Harrelson,” she tweeted Aug. 3 with a photo of her baby daughter Cora sporting a nearly toothless grin, alongside a smiling image of Harrelson from the 2009 film Zombieland.

Ok but how does our daughter look like Woody Harreslon? pic.twitter.com/v3oZbXDrQM

Many people chimed in with answers agreeing that Cora bore a striking resemblance to Harrelson.

“Omg she really does! A much, much cuter Woody, but still Woody!” wrote one user.

Omg she really does! A much, much cuter Woody, but still Woody!

It also caught the attention of the True Detective star, who isn’t on Twitter but responded with a poem on Instagram.

“Ode to Cora – / You are a lovely child / Flattered to be compared / You have a wonderful smile / I only wish I had your hair,” he wrote in the caption.

“It’s not every day that Woody Harrelson writes a poem for your daughter,” she tweeted.

It’s not every day that Woody Harreslon writes a poem for your daughter 🥹 pic.twitter.com/H9loQQ9gqZ

OTHER STORIES: Kim Kardashian has reportedly split from Pete Davidson

OTHER STORIES: ‘Danger!’ has decided who will be the permanent host

Biden leaves White House for 1st time since getting COVID-19

Semi driver indicted on 45 charges after crashing into Nashville home