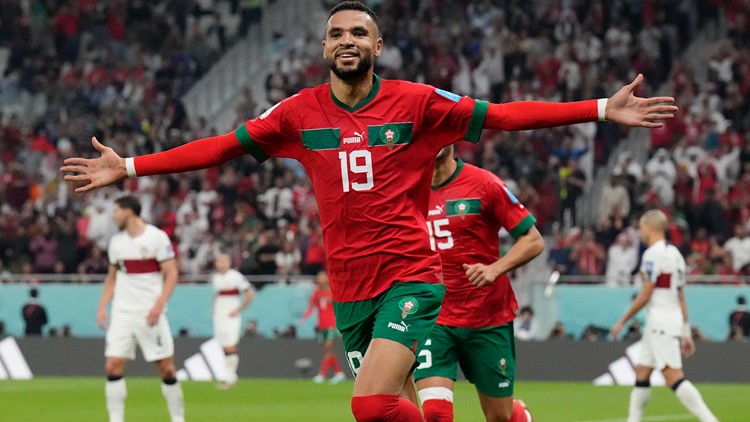 Youssef En-Nesyri scored the winner in the 42nd minute, continuing Morocco’s unlikely run that inspired much pride in the Arab world during the inaugural World Cup in the Middle East.

37-year-old Ronaldo, one of football’s greatest players, did not start for the second game in a row but was substituted on in the 51st minute and missed a chance to equalize in added time.

The five-time World Player of the Year will end his career without winning the World Cup or ever reaching the final. He walked straight off the field after the final whistle and cried as he walked through the tunnel.

Morocco will play either France or England in the semifinals.

It’s a landmark moment in World Cup history as an African nation finally rise to a level normally only achieved by European or South American teams. Cameroon (1990), Senegal (2002) and Ghana (2010) all reached the quarterfinals but failed to advance.

And off the field, this Moroccan side – coached by French-born Walid Regragui and with 14 foreign-born players – unites the Arab world and inspires fans in different countries to flaunt their Arab identity.

There’s also no reason why Morocco can’t advance to the title, having topped a group with second-placed Belgium and their semi-finalists Croatia, and have now defeated two of Europe’s heavyweights in Spain – after a penalty shootout in the round of 16 — and Portugal in the quarters.

The Moroccan defense have yet to concede a goal from an opponent at this year’s World Cup – the only one they conceded was an own goal – and they prevented a Portuguese team that beat Switzerland 6-1 in the Round of 16 from to huddle among them the favorites.

In a game played by Morocco’s fervent fans to nonstop whistles and jeers, the side relied almost entirely on counterattacks and scored from one of them.

A cross from the left and En-Nesyri jumped between Portugal goalkeeper Diogo Costa and defender Ruben Dias and headed into the empty goal.

Ronaldo, who will be 41 at the 2026 World Cup in the United States, Mexico and Canada, was aiming to reach the semifinals for only the second time since 2006.

Try as he might, he barely got a touch of the ball until stoppage time, when he got behind the Moroccan defense from a long ball forward. His low shot was parried by goalkeeper Yassine Bounou, who hadn’t had much to do until then.

Substitute Walid Cheddira was sent off for Morocco’s second yellow card in added time in as many minutes. Portuguese central defender Pepe then headed wide from the six-yard box.

Ronaldo fell to his knees in defeat. While Lionel Messi is in the semifinals with Argentina, the other football great of this generation will not be there.

Chargers’ 31-10 victory over the Rams by the numbers