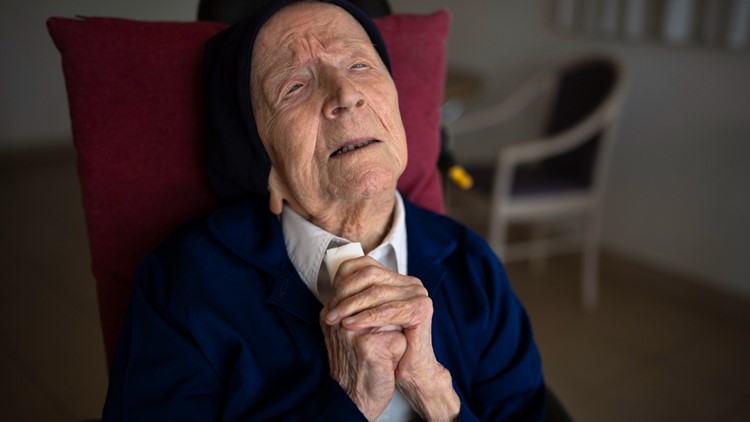 Sister André is just a few years away from becoming the oldest person ever.

PARIS, France — A French nun believed to be the world’s oldest person has died weeks before her 119th birthday, a spokesman for her nursing home in the south of France said on Wednesday.

Lucile Randon, known as Sister André, was born in the town of Ales, in the south of France, on February 11, 1904. She is also one of the world’s oldest COVID-19 survivors.

Spokesman David Tavella said she died at 2 a.m. Tuesday at the Sainte-Catherine-Laboure nursing home in the town of Toulon.

The Gerontology Research Group, which confirmed details of people believed to be 110 or older, has listed her as the oldest known person in the world following the death of 119-year-old Kane Tanaka, who Japan last year.

According to the Guinness World Records, Sister André worked during her younger years as a teacher, tutor and childcare provider during World War II. She spent nearly 30 years working with orphans and the elderly at a hospital before becoming a nun.

Sister André, who lived through the 1918 Spanish Flu pandemic, tested positive for coronavirus in January 2021, shortly before her 117th birthday, but she had very few symptoms, so I didn’t even realize I was infected. Her survival made headlines both in France and beyond.

David Tavella, communications manager for the nursing home where the nun lives, told a French newspaper: “She didn’t ask me about her health, she asked about her habits. “For example, she wants to know if mealtimes and bedtimes have changed. She shows no fear about the disease. On the other hand, she is very concerned about other residents.”

Sister André is just a few years away from becoming the oldest person ever, the title held by Jeanne Louise Calment of France. According to Guinness World Records, Calment died in 1997, aged 122.

In April last year, when asked about her exceptional longevity through the two world wars, she told French media that “working… helps you live. I worked until I was 108 years old.”

She is known to enjoy a daily glass of wine and chocolate.

The oldest known living person in the world listed by the Gerontology Research Group is currently Maria Branyas Morera, American, living in Spain and 115 years old.

Val Lick contributed to this report.

Eating cake in the office is as bad as passive smoking, watchdog warns