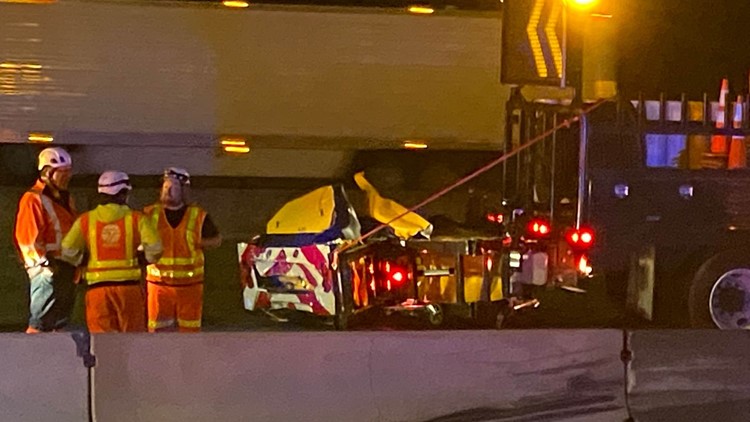 Two WSDOT vehicles and a state trooper were involved in a series of collisions on I-5 southbound in Tacoma early Friday morning.

TACOMA, Wash – A motorist was arrested after a series of crashes on Interstate 5 southbound in Tacoma early Friday morning.

The collisions occurred on I-5 southbound near 56th South Street, north of the Tacoma Mall.

According to WSP Trooper Sgt. In pursuit of VanCleave, multiple WSDOT trucks were sweeping the road in the right lane at about 12:42 a.m. when a vehicle crashed into the rear of one of the WSDOT vehicles guarding a street sweeper.

VanCleave said the driver of that vehicle, a 21-year-old man from Lakewood, was arrested on suspicion of DUI.

Minutes later, another accident occurred at the same location.

A multiple incident site on I-5 SB. A driver suspected of DUI crashed into a WSDOT truck undergoing maintenance and the vehicle was then run over by another driver a few minutes later. Many cars were hit. pic.twitter.com/ldcqYKFG6a

The driver of the second crash, which VanCleave said was a young woman, was taken to hospital with minor injuries.

WSP Trooper Robert Reyer said a WSP troper vehicle was also hit by a dark gray pickup truck in the right rear tire in the series of crashes. Reyer said the truck continued to head south of I-5 and the troops were unable to catch up with the vehicle. Reyer said the soldier was not in the vehicle when it crashed and was not injured.

No other injuries have been reported.

WSP has shared a reminder for drivers as the holidays are approaching.

WSP Sgt says: “Don’t drink, don’t drive. Go after VanCleave. “If you are under the influence of drugs or alcohol and you drive, bad things can happen. We’re lucky no one was seriously injured, but here’s what happens when you mix alcohol and dementia or drugs while driving. “

All incidents cleared up in time for Friday morning’s commute.

5 pumpkin recipes to get you in the fall mood

Lunar eclipse in US, 2022: Pictures, photo gallery, next date

The New Math of Reverse Mortgages for Retirees