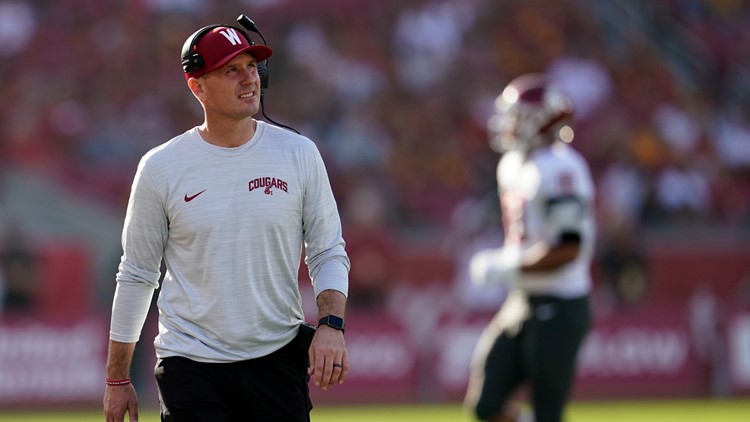 Saturday’s loss at No. 7 USC dropped Washington State to 4-2 in the season. The loss also cost WSU votes in the latest AP Top 25 poll.

PULLMAN, Wash. — Saturday’s loss at No. 7 USC dropped Washington State to 4-2 in the season. The loss also cost WSU votes in the latest AP Top 25 poll, which fell to 10 before week seven from 91 before week six.

However, what hurts the most in moving forward are injuries sustained by two key offensive players, namely Redshirt junior running back Nakia Watson and Redshirt senior wide receiver Renard Bell.

“We’ll be without Renard and Nakia for some time, but their leadership is much needed, much appreciated and the next few guys will be ready,” said WSU head coach Jake Dickert. “Both guys will come back eventually, but only a little bit later.”

While two big wins are just a few games away this season, frustration can ensue, but the Cougs have played very well.

What is easy to forget is that this is the first year of the Coach Dickert era.

Now the focus is on a very solid 4-2 Oregon State team that WSU will face off on the streets this Saturday.

“We still have a lot to prove. You know, those last six games will define this team. You know, we take it one game at a time, it’s going to be tough in this league,” Dickert said. “Oregon State is probably the most underrated team in this league. I think with all the veterans they have and the tough physical way they play. So I think for us it’s just about doing what we have to do and the reality of how our team has to play to win games.”

Washington State at Oregon State begins this Saturday at 6 p.m. The Cougs are looking to grab another win before heading into a much-needed bye week for a battered team. WSU at OSU can be viewed on the Pac-12 network.

https://www.king5.com/article/sports/ncaa/ncaaf/cougars/wsu-prepares-for-oregon-state-after-loss-usc/293-8110a69f-18fa-4084-b78e-a5249f8ec17f WSU looks to rebound against Oregon State after loss to USC

L.A. basic income program to give young adults $1,000 a month