Compared to previous Xbox consoles, Xbox Series X offers higher-end hardware and higher screen resolutions – up to 8K – as well as higher frame rates and real-time ray tracing for faster and more efficient gaming. The console also features a high-speed solid state drive to reduce loading times. The Xbox Series S, which uses a similar CPU but a less powerful graphics engine, is cheaper than the Xbox Series X, but packs less RAM and internal storage and lacks the optical drive that makes the Xbox Series X so popular. However, both consoles are designed to support almost all Xbox One games, controllers and accessories – as well as many games from older Xbox consoles. Both consoles are also compatible with gaming subscription services like Xbox Game Pass as well as Xbox Cloud Gaming, a cloud game streaming platform.

“It’s a truly amazing console. As soon as I set it up and downloaded a few games for my son, I really noticed the download speeds and performance improvements,” reads an Amazon review. Another reviewer wrote: “Incredible machine. Set up in a flash. The app is the key to easy setup. Feels so smooth. HDR is incredible for upscaling games. Nice to now have 800GB and purchaseable expandable storage.”

Read on for the best Xbox Series X/S Cyber ​​Monday deals on bundles and games.

If you’re looking for the X or S series X box console plus extras, you can score here on Cyber ​​Monday 2022. 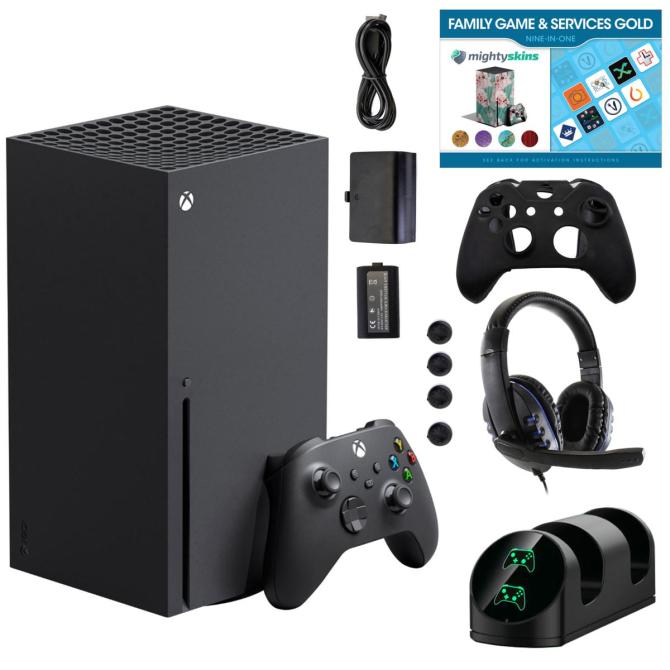 This bundle includes the X Box Series X Bundle with a whopping 1TB of storage, a dual charging dock, a wired headset, a silicone case, and a mega coupon (see the Software tab for coupon details). You’ll save an AMAZING $350 off at a price of $649.99 off the original price of $999.99. Here’s what users are saying about the X Box Series X.

One reviewer praised the Xbox Series X’s speed compared to previous Xbox consoles. “The Xbox Series X addresses the weakest point of the Xbox One X: speed. It has a powerful CPU and a built-in SSD in addition to its monstrous GPU. You’ll be impressed by the speed right from the start,” the review reads.

“The initial setup was super quick and even allows you to copy settings from the cloud that you backed up from your previous console. You’ll be up and running in no time and if you’re a Gamepass subscriber you’ll be playing great games.” The review continued, “The backwards compatibility really shines and it’s a pleasure to return to some of your favorite titles that are now packed with the power of the Series X doing better… I really like the feel of the new controller and it seems like they’ve made slightly fewer but overall sensible changes to it. The bumpers seem more responsive to me and the share button is a useful addition.”

While not quite as powerful as its beefy Series X counterpart, the Series S is a more affordable, beginner-friendly console for those who still want to experience what this latest X-Box console has to offer, and at $50 at that save up. This X Box Series S bundle includes all the console basics, plus a second wireless controller, a HyperX Cloud Stinger headset, and a coupon. A Tom’s Guide review said it’s a “powerful console with an amazing amount of games on offer – not to mention it plays streaming media with ease and doesn’t take up too much space in your house”.

Halo infinity is by far one of the best-selling games on Xbox Series X and HSN’s Xbox Series X Halo infinity Bundle is the perfect start for your game collection. Halo Infinite is the sixth game in the gloriole series and the third game in Halo’s “Reclaimer Saga” after 2015 Halo 5: Sentinels.

The first person shooter game follows the human super soldier Master Chief and his battle against his enemy Banished on the Forerunner ring world Zeta Halo aka Installation 07. Unlike previous Halo installments, Halo infinity is the first game in the series to feature free-to-play multiplayer. Many critics called the game one of the best in the world gloriole Series for its graphics, gameplay, open world design, soundtrack and story. Along with the $100 savings on this bundle, you get Hello infinity, the Xbox Series X, a wireless controller, a dual charging station, wired headphones and vouchers for Microsoft’s Game Essentials and Family Game & Services Gold for more free gaming fun.

For the real gloriole fan this is coming Xbox Series X Limited Edition Halo Bundle to celebrate the game’s 20th anniversary. This pack comes with a special gloriole-designed console and controller, in addition to the wired headset, silicone case, charging station and coupons. Save $65 on this perfect gift for the gloriole Stan

Next to gloriolethe call of Duty Franchise is the other iconic title of XBox. In the 19th episode Modern Warfare II sends you on a new campaign with British Special Forces Task Force 141 and Mexican Special Forces Los Vaqueros as you try to track down Iranian Quds Force Major and terrorist Hassan Zyani. This XBox Series X Modern Warfare II The package includes the console, a wired headset, a silicone case and two coupons with a discount of $153.01.

Want to update your game library? Look no further for bargains.

A real contender for game of the year, the epic Elden ring by FromSoftware is the perfect introduction to the Souls-like genre for newcomers. The open world environment is absolutely gorgeous and encourages exploration like never before. Battle formidable foes with the strategic combat FromSoft is best known for in a fantasy world unique to George RR Martin (game of Thrones) could create. Best of all, this speedy classic is significantly cheaper than usual at $35 versus $59.99.

More of an interactive film than a video game, The Quarry
is a survival horror game set in a school camp where nine teenage counselors plunge into an unpredictable night of terror. As the night progresses, you’ll play as each of the nine characters, and depending on your choices, some of them may not make it to sunrise. This game flew under the radar a little when it first came out, so there’s a 72% discount, there’s never been a better time to try it out. It’s only $19.93 less than $59.99.

The first time Square Enix ventured into the Marvel Universe Marvel’s Avengers, it… didn’t go so well. The game was not well received by critics or gamers. It’s unfortunate because these negative reviews have spoiled what would be a truly fantastic release Guardians of the Galaxy: no microtransactions, no multiplayer and a great story. According to an IGN review, “Marvel’s Guardians of the Galaxy balances a goofy, action-packed adventure with some genuinely candid story moments, and the choices you’re given can add some surprising personal twists to your particular playthrough. You can get it for $14.99 from $34.99. That’s a savings of $20. Gigantic.

For the football fan you can not miss Madden NFL 2023 with his eponymous trainer John Madden on the cover for the first time. The game introduces the all-new FieldSENSE gameplay system, which provides the foundation for consistent, ultra-realistic gameplay and gives players more control in all positions in every mode. Get this legendary title for $34.99, which is $35 off the original price.

Probably the last in the Grave robbers reboot series (although certainly not the all-time finale in the franchise) is coming Shadow of the Tombraider by Crystal Dynamics and Square Enix. IGN said the environments “also deliver a wonderfully eerie atmosphere. A ubiquitous cult, an unnerving string-based score and an aggressive underground enemy type, The Yaaxil, in common Shadow of the Tomb Raider often feels like a horror game, making for wonderfully tense exploration as you wade through mounds of bodies or hear animal growls in the distance. Once again there’s that clever homage to the 1996 original; in this case, to his weird, psychedelic heart.” Get it for just $17.99 instead of $24.99.

Follow live: Brazil look to stay on top of Group G as they take on Switzerland without Neymar

Why House M.D. Should Never Get a Reboot

A$AP Bari Accuses A$AP Rocky Of Being ‘Burnt Out’