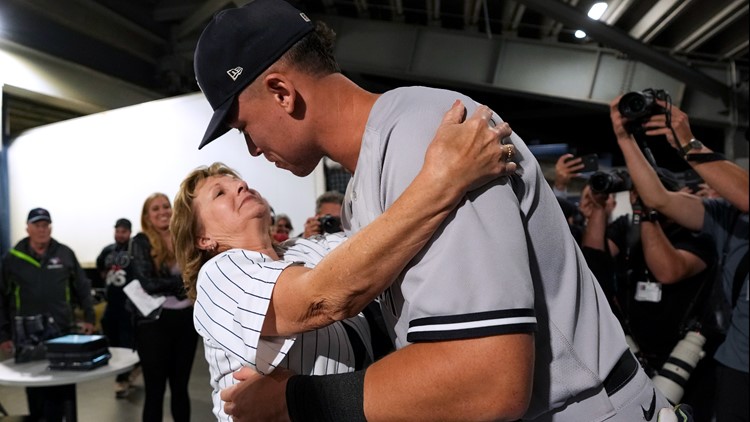 Aaron Judge got the record ball back from Roger Maris AL after hitting the No. 61 in Toronto on Wednesday night and he gave the ball to his mother.

TORONTO, ON — When American League-record-setting Aaron Judge’s 61st home run fell in Toronto’s bullpen, coach Matt Buschmann picked it up — a souvenir worth potentially hundreds of thousands of dollars.

“The bad news is I’m battling a hurricane down here in Florida, but the good news is I can announce my retirement.” tweeted Bushman’s wife Sara Walsha Fox Sports reporter and former ESPN host.

Then Bushman and Blue Jays closer Jordan Romano passed it to Yankees reliever Zack Britton, who made sure it got to Judge.

Walsh then added: “Oh cool. He just returned this without checking if our house is still there? Next I want to announce our divorce.”

And to make it perfectly clear that she was only joking, She continued to tweet: “Just a reporter working here…according to my sources…Matt Buschmann wasn’t forced to return the ball but he handed it off to Zack Britton,” adding that he told her, “The Judge and Maris family are across the country flown. You deserve to have that ball.”

Judge entered the Yankees streak in Toronto this week, just short of the AL record of 61 homers set by Roger Maris in 1961. The only players to surpass Maris – Barry Bonds, Mark McGwire and Sammy Sosa – all did so as suspected or confirmed steroid users, leading some to view Judge’s quest as a push for the legitimate season record.

When Judge hit a 3-2 pitch from Blue Jays left-hander Tim Mayza toward lower deck in left field in the seventh inning Wednesday night, fans with gloves braced themselves to try and capture a piece of baseball history. Instead, the ball brushed past two outstretched gloves, bounced off a wall, and landed in the Toronto bullpen.

SUBSCRIBE to the daily Locked On Yankees Podcast for daily coverage of Aaron Judge and the New York Yankees. Free and available everywhere

“You’re overcome with disbelief and only shock and wonder,” said Frankie Lasagna, one of the two fans closest to the ball. “I was like, ‘Oh my god, I almost made it.'”

Lasagna, a Toronto restaurant owner, knew what was at stake when he bought his front row ticket. He said he wouldn’t normally bring a glove to a game.

“In the front row, I felt like you had the best chance,” he said. “Lo and behold, I was only a few feet away.”

Next to Lasagna, a Blue Jays fan wearing a Bo Bichette jersey got even closer to Judge’s drive. He was visibly distraught when it slipped his hands and declined to be interviewed.