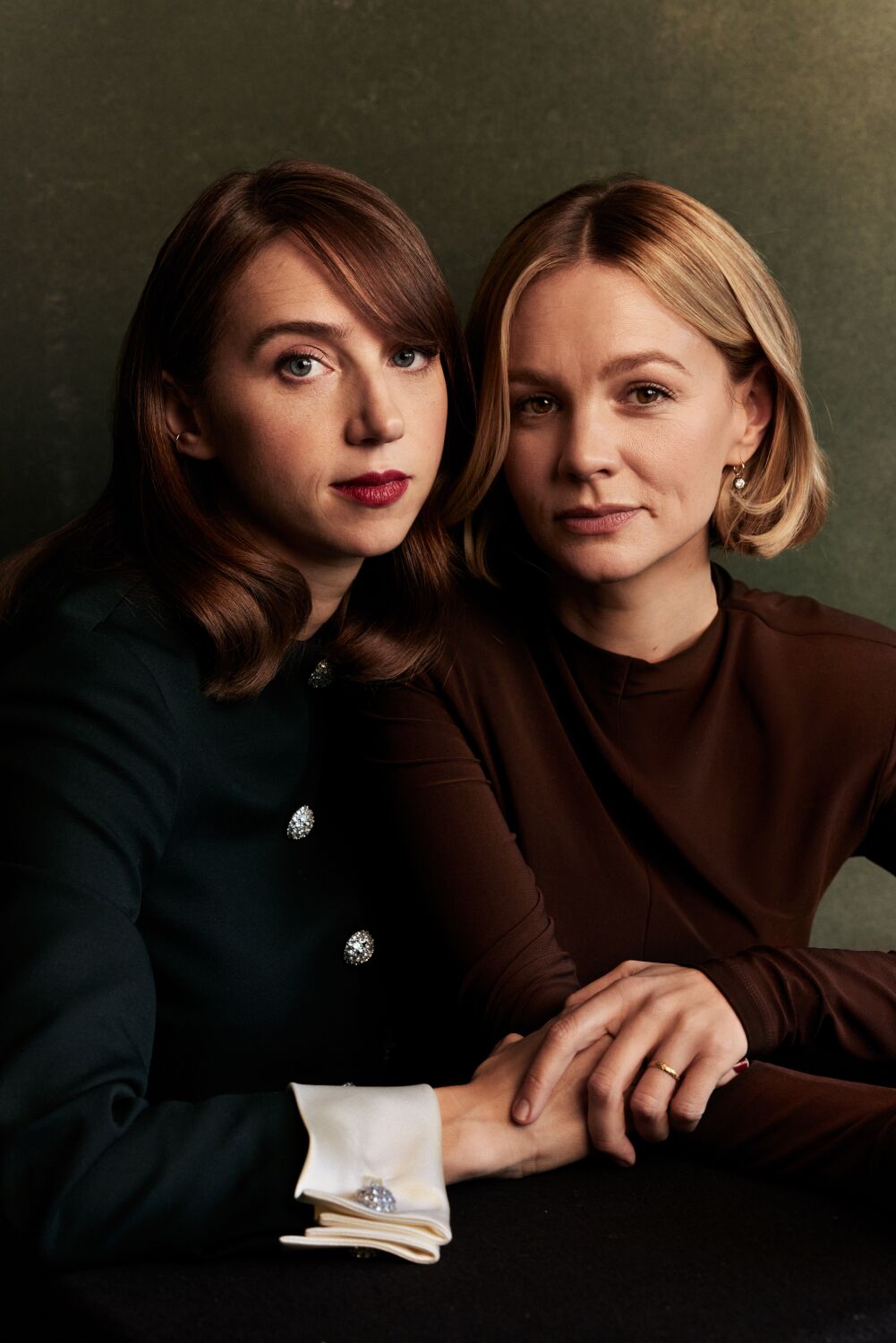 An early acting challenge for Zoe Kazan and Carey Mulligan on She Said was showing veteran newspaper colleagues carefully assessing one another. Mulligan, who plays the well-armored Megan Twohey, tells Kazan’s more approachable Jodi Kantor, the New York Times reporter whose investigation brought down film producer Harvey Weinstein, “They had a working relationship pretty quickly, but Jodi remembered when When they first met you thought, ‘She’s not for me.'”

Kazan and Mulligan, on the other hand, have been finishing each other’s sentences since 2008, after both appeared in the Broadway production of The Seagull and became so close it affected She Said director Maria Schrader. “She wanted to know if [our friendship] would be an obstacle,” says Kazan. “I told her, ‘No.'”

Recently, while seated on a patio at the Four Seasons in Los Angeles, the pair spoke of how having access to Kantor and Twohey influenced their beautiful, closely watched performances, from the quiet seriousness that exudes in scenes where they tremble wells placating, to understanding the effort it takes to unearth bombastic reporting. “I had this naive idea that they just had to find out the truth and then publish it,” says Kazan. “I was surprised by the amount of backup and evidence they had to have for everything.”

The pre-production research involved a lot of hanging around. What was helpful when you visited a reporter’s home?

Kazan: The first thing that struck me was that Jodi and [her husband, New York Times columnist Ron Lieber] both have desks in the kitchen. It’s not her main job. But work is at the heart of the house. There are stacks of paper in the corner. Jodi’s awards sit alongside pictures of her daughters and family. Everything is entangled. That’s so recognizable to me. I have a tiny desk in our bedroom. In the New York apartment you make everything work in a Tetris-like way. Also, I grew up with it: my mother’s desk was around the corner from our kitchen, and my father’s desk was around the corner from it.

Mulligan: I never went to Megan’s. I went to her office. She often came to my house.

What did you want to capture about Megan herself?

Mulligan: So much. Something interesting about both [is] her speech pattern. They complete the thought before they speak. The whole thought is thought out, then they say the words. There’s no um or ah, no hesitation. That’s exactly what they mean. At first there’s something really intimidating about someone being together like that.

Jodi, Megan and you both have children. Talk about juggling work and motherhood.

Mulligan: Whenever I have the opportunity to fly somewhere with my family, I always think, ‘How do I make it so fun or manageable? [them]?”

Kazan: Carey said, rather casually, “I don’t know what to do with my kids in the New York summer.” And we got a full dossier back: where to send kids to camp, where to take them on a Sunday. Best hospitals to go to. It was almost like a parody of what you would get from two journalists.

Wait. Your Parents’ Insider’s Guide was put together by Pulitzer Prize winners?

Mulligan: … This huge document of children’s activities in Brooklyn. I took my son to the hospital within the first few days. He was fine. He had only split his lip. But I had not consulted the document. I remember the first thing they both said was: [urgently] “What hospital were you in?”

Mulligan: With what they reported, threats against them, being followed, phone taps tapped, all that stuff, doing that in isolation – even if you have a team of editors – would feel pretty awful.

Kazan: I remember Jodi telling me so much that Megan brought a lot of concrete experience and expertise to the investigation, but also that it felt so good not to be alone. They carried so much knowledge with them that they could not tell anyone.

What kind of reporter do you think you would make?

Mulligan: One of the reasons I wanted to [take the role] was that I couldn’t understand investigative journalism, calling someone in the middle of the day and asking potentially triggering questions. You know, “Please tell me about this horrible thing that happened to you that you may not even have told your family about. I’d love to put it in the newspaper!” The fascination for me was, “How’s that your job?” I know if it were me, I’d be up all night thinking, “Gosh.” What am I up to What I’ve learned from spending time with them is that they have a firm belief that what they’re doing is for the right reasons. But I think I’d be terrible at it. I don’t know how to dial the number, I’m so scared.

Kazan: I can imagine persistently pursuing something, doing tons of research, digging through documents. But the cold calling? I would have a hard time with that.

What’s the overlap when it comes to acting and investigative reporting?

Kazan: When I asked Jodi, “How do you approach a source?” She said, “My job is to make them feel like they can speak.” That made me think, “Oh, that’s like acting on stage.” , where it’s so much about opening your body and listening to the other person.” Our goal is different, but they are similar skills that have to do with the permeability of listening.

Mulligan: They talked about how no two sources or encounters are alike, that different tactics would be used. But Megan also talks about somehow enjoying taking on these powerful characters, that she’s fueled by it.

Sounds like you’ve found the right calling in life.